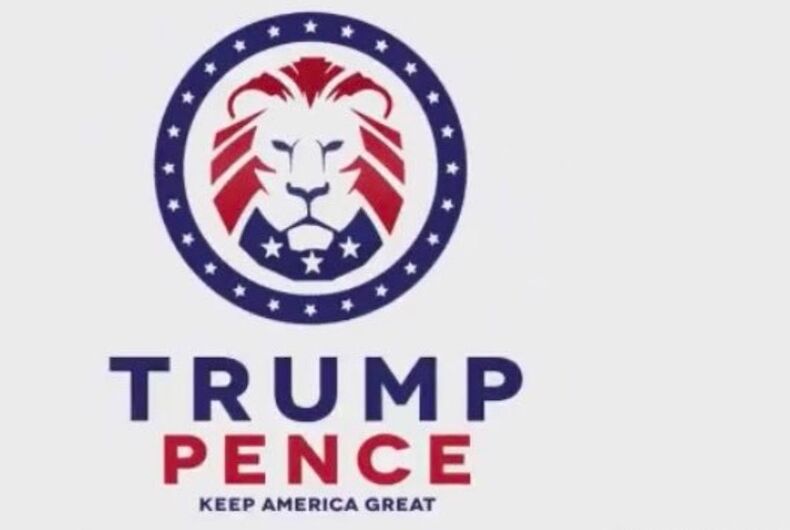 As he revs up his re-election campaign, President Trump has hardly hidden his disdain for people of color. He’s told U.S.-born members of Congress to “go back” to their ancestral countries. He has described Central Americans legally seeking asylum in the U.S. as an “invasion.” He has called Rep. Elijah Cummings’ Baltimore district as a “rat and rodent infested mess.”

And that was just July.

So it comes as no surprise that Trump happily retweeted an independent group’s video for his campaign with a Trump-Pence logo using white supremacist imagery.

The image, of red, white and blue lion surrounded by stars, may look like the mascot for a high school football team. In fact, it’s an image created by VDARE, which Mediaite describes as “an anti-immigration group criticized for promoting White Supremacy.” The group takes its name from Virginia Dare, the first white infant born in the New World, in 1587.

Just to add a dollop of fascism to the mix, the image was apparently inspired by the time when Trump quoted Italian dictator Benito Mussolini as saying “It’s better to live one day as a lion than 100 years as a sheep.”

As a bonus, the campaign video touts the rising stock market by showing an image of the Wall Street bull with swinging testicles.

In short, Trump’s retweet, as with so many of the white supremacy messages he embraces, is a veritable orchestra of dog whistles.

But because Trump doesn’t come out and just use the n-word (well, at least not publicly). his supporters are quick to claim that the people who call Trump racist are the real racists. Tucker Carlson has declared the talk of white supreamcy a “hoax,” which has led to an exodus of advertisers from his program.

As a reminder, the folks who traffic in white supremacy are also virulent homophobes. Just a few weeks ago, police arrested a white supremacist in Las Vegas who was plotting to firebomb gay bars and synagogues. The group he belonged to had trained another member, who stabbed a gay man 20 times, an act of violence that the group celebrated.

Unfortunately for the nation, the man who is spreading the message from such low lifes is the president.