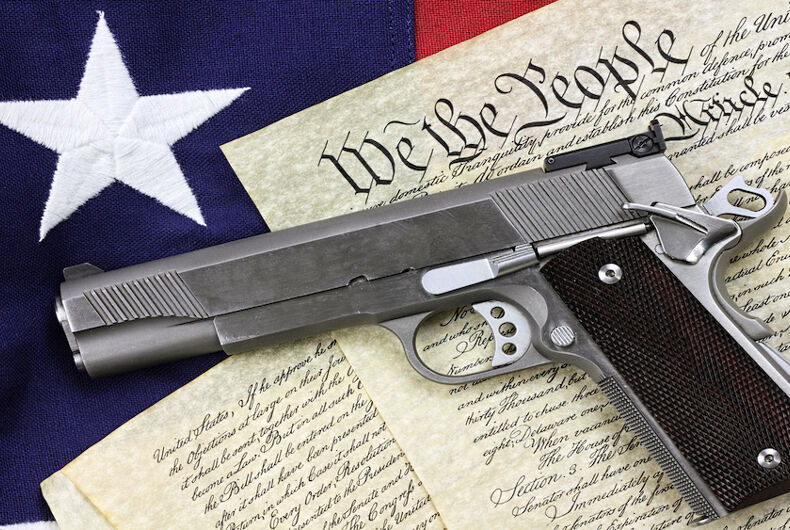 On November 5, 2017, in Sutherland Springs, Texas, a man in tactical-style gear shot and killed 26 people at the First Baptist Church, including adults, children and an unborn fetus. He also wounded 20 others.

Yes, ‘n’ how many times must the cannon balls fly
Before they’re forever banned?

Related: White Republican evangelical Christians own the most guns. Why?

On May 28, 2018, at Santa Fe High School in Texas, a 17-year-old male student shot and killed ten people – eight students and two teachers – and wounded 13 others.

Yes, ‘n’ how many years can a mountain exist
Before it’s washed to the sea?

On August 3, 2019, at Walmart near the Cielo Vista Mall in El Paso, Texas, a white nationalist espousing racist views shot and killed 22 people and wounded 24 others.

Yes, ‘n’ how many years can some people exist
Before they’re allowed to be free?

In June 2019, a series of new gun measures got passed by the Texas legislature and was signed into law by Republican Governor Greg Abbott. They’ll take effect September 1.

Yes, ‘n’ how many times can a man turn his head
And pretend that he just doesn’t see?

While four of the top 10 deadliest mass shootings since 1949 in the U.S. occurred in the state of Texas, one might speculate that legislators there would tighten regulations on firearms. But contrary to reason and logic, one would be seriously (and deadly) mistaken.

Yes, ‘n’ how many times must a man look up
Before he can see the sky?

In fact, Texans are now saddled with even looser firearms laws, which represent the laxest in the nation.

Yes, ‘n’ how many ears must one man have
Before he can hear people cry?

One of the new measures further clarifies that it’s legal for licensed gun owners to tote their weapons into houses of worship, unless a posted sign announces otherwise.

Additionally, licensed gun owners, including school employees, may store their weapons and ammunition in locked vehicles on school campuses if these are out in plain view. The law also removes any limit on the number of school marshals who can carry guns on school premises.

Landlords can now no longer forbid their legally gun-owning tenets from keeping weapons and ammunition on their property. Also, handgun owners may now carry concealed weapons without a license for up to 48 hours when having to evacuate in emergencies, such as hurricanes.

Another measure grants foster families permission to store guns and ammunition together for immediate protection rather than having to store them separately. Huh?

Yes, ‘n’ how many deaths will it take till he knows
That too many people have died?

Yes, ‘n’ Bob Dylan, though you asked these poignantly critical questions back in 1962, our society and world today seem no closer capable of giving reasonable and defensible answers blowing in the wind or anywhere else. Instead, we reply counterintuitively and, hence, counter-effectively.

Like our actions which worsen climate change by deregulating environmental protections, our response to lowering gun deaths is fashioning firearms legislation that makes guns even more accessible to more people.

Like bowing to the interests of fossil fuel, logging, mining and corporate agribusiness industries, legislators kiss the bloody rings of firearms manufacturers and their lobbyists.

Thoughtful and reasonable people know that “It’s the guns, stupid,” are legislators just too stupid or simply detached from reality to know this?

Legislators disconnect the best wishes of their constituents from their own (in)actions.