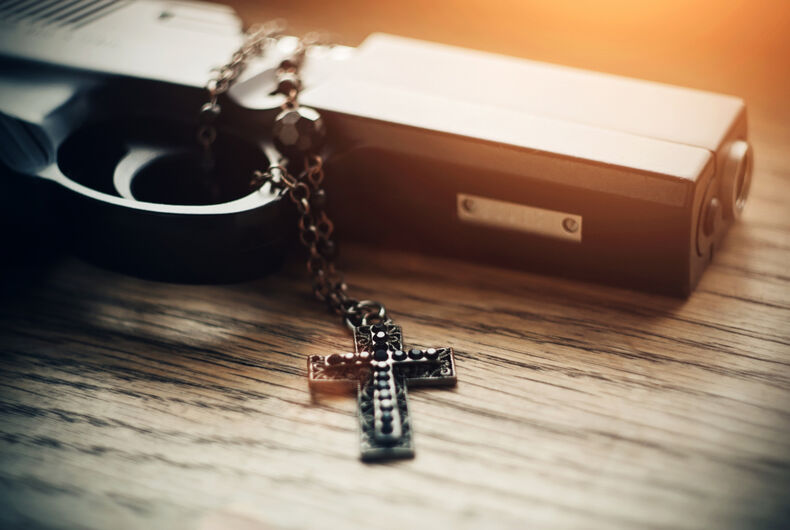 A Pew Research Center study found that the highest rates of gun ownership in the United States are among white Republican white evangelical men. Surprise, surprise!

Men (39%) are more likely to own guns than are women (22%). In addition, people who live in rural areas own guns in higher proportions than residents of urban areas (46% and 19% respectively). Republicans and Republican-leaning independents are more than twice as probable to own firearms (44%) than are Democrats and people who lean Democratic (20%).

Across racial demographics, white people have the highest frequencies of gun ownership (36%), with blacks at 24%, and Laxinx at 15%. Approximately two-thirds of gun owners report they own more than one gun, with 29% boasting ownership or five or more guns.

Regarding religious affiliation, white evangelical Protestants own guns at the highest levels (44%) of any religious group compared with U.S. residents overall (30%). They responded (44%) that they are satisfied with current gun laws, which is significantly above the total of 30% of the U.S. population overall. Only 32% of white evangelical Protestants call for stricter gun control measures versus the majority (52%) of the larger U.S. voting populace.

They believe in the notion of ruthless individualism while society be damned. It doesn’t take a village to raise a child for them, but only a man and his wife alone and independent.

Resistance to social change is and always has been their credo. We have witnessed the same as we moved from a largely agrarian society to industrial technologies, and then into the digital information age. Societies often do not transition smoothly in an environment free of conflict and backlash.

They pervert the concept of “freedom” by linking it to the relatively unlimited access to firearms. If our nation does not impose common sense regulations on firearms ownership, life in the United States will become even more tenuous. And besides, where in the Christian testaments is it recorded that Jesus said: “Pack heavy and blow the SOBs away”?

But where are Republican white Christian evangelicals getting their advice since their testaments are contradictory at best? Christian pro-gun advocates often cite the Gospel of Luke 22:36 where Jesus told his disciples, “If you don’t have a sword, sell your cloak and buy one.”

“Put your sword back in its place,” Jesus said to him, “for all who draw the sword will die by the sword.”

“But I say to you, Do not resist the one who is evil. But if anyone slaps you on the right cheek, turn to him the other also.”

It doesn’t take a rocket scientist to explain why Republicans, white men, and Christians represent the leading groups demographically in the rate of gun ownership and opposition to regulations on the firearms industry.

Muslims, Jews, Sikhs, Hindus, and non-affiliates are being elected in greater numbers in local and state elections. Two high-profile Muslim women now sit in the U.S. House of Representatives. And Republican white Christian men hold on even tighter to their guns.

As women and people of color gain more social and economic power and fill the ranks of businesses in positions formally closed to them, Republican white Christian men hold on even tighter to their guns.

As ethnic and racial demographics change to the point where trends indicate that white people will soon no longer constitute the numerical majority, Republican white Christian men – whether of not they define themselves as “white nationalists” or the like – hold on even tighter to their guns.

The days of wild West rugged individualism are over. Either we change our style of living to consider the common good, or else we will certainly and more quickly increase our chances of dying individually and as a nation.

If you need to feel the pulsating heat of a throbbing weapon of war in your hands, join the military and serve your country. Or go to a firing range where you can overcompensate for your penile insecurities.

If you wish to commune closer with your conception of the Divine, lay down your weapons, meditate, and begin truly to listen to the still and gentle voices well within yourself.

If you need to better protect yourself and your loved ones, push for comprehensive firearms regulations and help to get these weapons of death off our streets, out of our schools and our homes.

Our country has no higher rates of mental illness than our peer nations, but no other comparable country suffers the casualties to guns as the United States. We must remember first and foremost that hate is not a mental illness.

As a misbehaving and obstinate child who places themselves in harm’s way by stepping too close to the edge of a high cliff, we as a society must place restrictions for the physical and emotional safety of our society.

We must continually challenge the political right’s obsession with the so-called “freedom” to bear arms because it is not only “criminals who kill people” as Second Amendment advocates claim. To paraphrase political consultant James Carville, “It’s the guns, stupid!”

After he kissed his boyfriend at the bar, the bouncer approached him. Then it turned ugly.