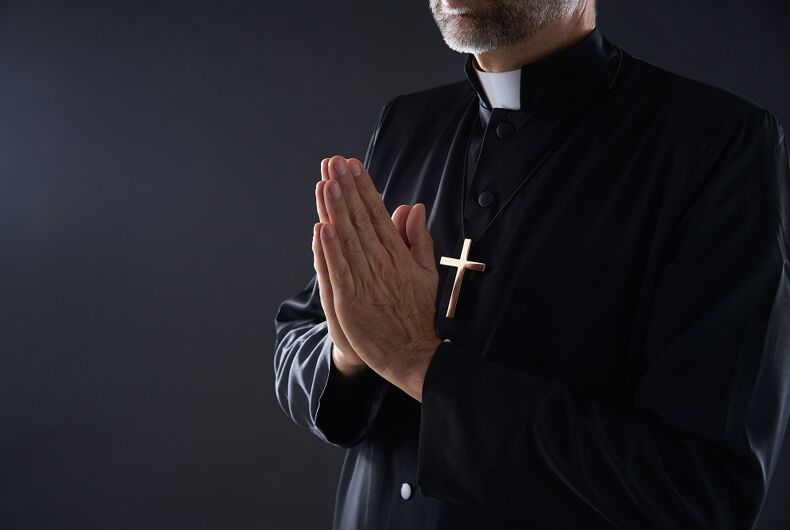 A Catholic priest has been accused of stealing almost a hundred thousand dollars from his church and spending the money on Grindr hookups.

Joseph McLoone, 56, of Downingtown, Pennsylvania, was arrested this past Wednesday. Authorities believe that he stole $98,405.50 from St. Joseph’s Catholic Church.

Investigators said that after he took over as pastor of St. Joseph’s in 2011, he opened another bank account called “St. Joseph Activity Account.” The account contained money both from church donations as well as from fees for funerals and weddings.

After money had built up in the account, McLoone withdrew $46,000 from a location near his beach house in New Jersey. He admitted to using the money for “personal relationships” with other men, which investigators believe was for travel and dining.

Related: Depraved priest arrested for molesting boys & forcing them to ‘confess’ it to him

He put $1200 in the commissary account of a New York state inmate who wasn’t a part of his congregation. McLoone said that he met the man on Grindr.

Investigators also found that he made $1720 total in 17 payments to different men using an app on his phone.

Police believe that McLoone got the money by increasing the fees his church paid for services like funerals and weddings, as well as increasing stipends to priests in the church.

“Instead of taking their normal amount, Father McLoone was paying double the amount to himself and the other priests,” Chester County District Attorney Chief of Staff Charles Gaza said.

In 2018, the Archdiocese of Philadelphia opened an investigation into the church’s finances, and later that year McLoone was put on leave.

“These charges are serious and disturbing,” the archdiocese said in a statement. “The Archdiocese and the parish will continue to cooperate with law enforcement as the criminal matter enters its next phase. Pending the outcome, Monsignor McLoone remains on administrative leave. Information regarding his arrest will be shared with the Saint Joseph Parish community.”

McLoone’s attorney said that he earned the money legally and spent it how he pleased.

McLoone took over as pastor at St. Joseph’s in 2011 when the previous pastor was accused of concealing child sex abuse in the church.

White Republican evangelical Christians own the most guns. Why?