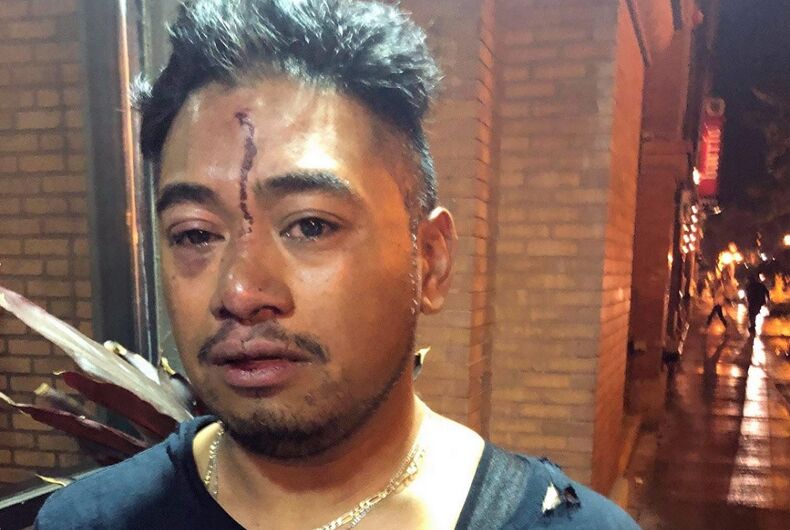 A gay man is accusing a bouncer at a restaurant in Minnesota of beating him, but the bouncer says that he only dragged him away as other patrons beat him.

Benji Sansón, 33, said that he was at the bar trying to order drinks when he kissed his boyfriend at the Barrio in St. Paul this weekend.

That man, Sansón said, was the bouncer at Barrio.

“He was calling me a very derogatory name for me being gay,” he added.

He said that’s when the confrontation turned violent. The man grabbed him.

“I told him to get his hands off of me and then he just started punching me in my face,” Sanson said.

After that, he said that the man dragged him across the floor and then threw him down cement stairs, possibly with the help of another man.

He was treated at the scene for a laceration to his head because he was bleeding. He later went to the emergency room and was treated for a concussion. He also had bruises on his body.

“Physically, I’m really sore,” he said. “I’m more mentally scarred. It makes me very sad that in 2019 someone can’t go to a bar and be themselves.”

The bouncer at Barrio has a different story. He told police that he thought he saw two men fighting and tried to intervene, but then he saw that they were actually kissing.

“[The bouncer] told them to chill out and he says he grabbed one by the wrist,” a police spokesperson said about the bouncer’s statement.

The bouncer said that the men confronted him and other patrons started pushing and shoving. Sansón ended up on the floor. That’s when the bouncer dragged him out of the restaurant, but contends that someone else punched Sansón in the face.

Police said that the investigation is on-going and that no arrests have been made. They said they are investigating the possibility that this was a hate crime.

The restaurant said that they’re siding with the bouncer.

“We take any allegation that one of our guests was mistreated very seriously,” the restaurant said in a statement. “We don’t tolerate any form of discrimination or inappropriate conduct by anyone associated with our company.”

“Based on what we know so far – the account of our security guard as well as those of a number of witnesses and our review of our security footage – we believe our colleague acted only to defend himself and to ensure the safety of our other guests when physically attacked.”

“Reports that two employees were involved in this altercation are incorrect.”

A straight man committed a crime at Target. A religious hate group is blaming trans people.

White Republican evangelical Christians own the most guns. Why?