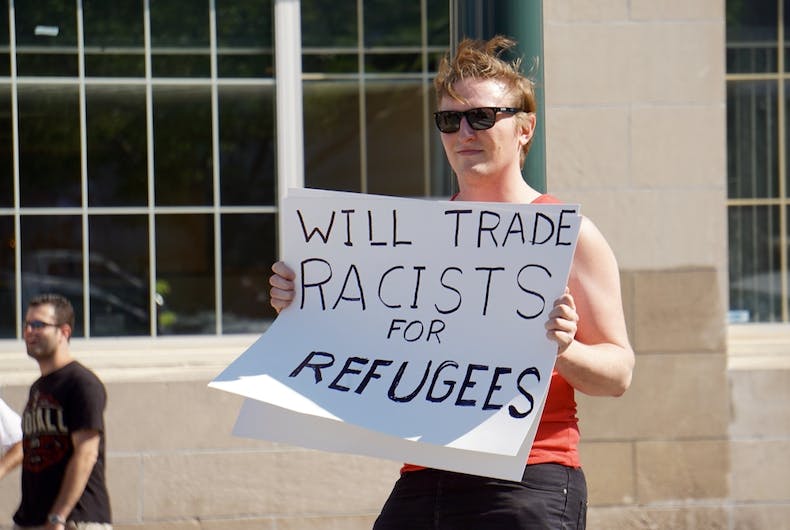 This land is your land, this land is my land
From California to the New York island
From the Redwood Forest, to the gulf stream waters
This land was made for you and me…

The opening lines from Woodie Guthrie’s iconic song, “This Land Is Your Land,” challenges all people upon this land to ask ourselves whether these inspiring words reflect an overarching mission statement for the United States, or whether they simply testify to his embrace of propagandist pablum that the elites on this land promote around the world.

400 years after European-heritage people abducted and enslaved Africans for this land we now call the United States of America, the President tweets hateful diatribes against citizens, refugees, and immigrants. We as a nation must decide whose land this land is anyway.

From the day European explorers and settlers stepped foot on this land, dominant Protestant Anglo-Saxons set rigid parameters defining who were to be included as “my” on this land.

In her pioneering book, Homophobia: A Weapon of Sexism, Suzanne Pharr describes a series of elements she finds common to the multiple forms of oppression. Such elements include what she refers to as a “defined norm” and a “lack of prior claim” among others.

Pharr explains a defined norm as “…a standard of rightness and often of righteousness wherein all others are judged in relation to it. This norm must be backed up with institutional power, economic power, and both institutional and individual violence.”

Another way “the defined norm manages to maintain its power and control…” and kept exclusive is by what Pharr refers to as the element or system of “lack of prior claim.”

This, according to Pharr, “…means that if you weren’t there when the original document [the Torah, the Christian Testaments, the Qur’an, national Constitutions, corporate founding documents, for example] was written, or when the organization was first created,” she wrote, “then you have no right to inclusion….Those who seek their rights, who seek inclusion, who seek to control their own lives instead of having their lives controlled are the people who fall outside the norm….They are the Other.”

In the original and unamended version of the U.S. Constitution, for example, since only European-heritage male land owners had the right to vote, all Others, including women and people of color, had to fight long battles to gain access to the voting booth, often under the threat of violence.

The framers of the Constitution decided enslaved Africans constituted only three-fifths of a full human being for census purposes. Some who continue to oppose marriage equality assert that this is outside the defined norm, lacks prior claim, and would undermine the sanctity of marriage and lead to the destruction of society.

When patriarchal social and family structures converge with patriarchal religious systems, the oppression of women, girls, and those who transgress sexuality- and gender-based boundaries become inevitable.

A spate of state legislatures have either passed or have considered passing laws prohibiting trans (and by implication, intersex) people from entering public restroom facilities that conform to their gender identities and expressions, but may differ from the sex assigned to them on their birth certificates.

With the recent wave of brutal mass terrorist murders on this land targeting Latinx, black and LGBTQ people, Muslims, Jews, and Sikhs, several of the perpetrators gained their inspiration and justification from the long-standing ideological underpinning of patriarchal Christian white supremacy.

People of good will, who adhere to the idea that “all people are created equal,” abide by Woody Guthrie’s vision that “this land was made for you and me” and have reacted with shock, grief, and anger by the domestic terrorism overtaking this land.

We place blame on white nationalism, the groups and individuals, and a president who consistently promotes hatred and divisions, who targets people as “invaders” and “rapists,” overtaking this land and robbing its “good citizens” of their livelihoods.

But what about the remainder of white people on this land? What part do we play in perpetuating the defined norm of white supremacy?

The very definition of what it means to be “white” has changed and expanded since the Pilgrims disembarked the Mayflower. Down the line of generations that came after the Pilgrims, once circumscribed to the ranks of the marginalized non-white “races,” other European-heritage people, for example, Irish, Italian, Polish, Greek, and Slavs fought their way toward the “white” defined norm side of the racial continuum.

Ashkenazim (western and eastern European-heritage Jews) began to be seen as “white” by some European-heritage Christians only after World War II but remain today largely classified as “not fully” white in many quarters. By some people United States today, I am defined on the “white” side of the massive racial continuum. Therefore, a friend of mine states, “I am white enough to have white privilege.”

I am responsible for the marginalization of anyone and any group whenever I coast on my white privilege or when I discount its effect on my life outcomes. I am also responsible when I minimalize the degree and effect of racism upon racially minoritized people.

Woody Guthrie’s anthem certainly does not represent the United States at this critical juncture, or frankly, throughout our history. Woody, though, constructed a platform on which he placed a beacon to guide a nation he loved toward a path of righteousness the likes of which the world has yet to realize.

The next step on our path is to expand the defined norm of “American” to embrace you and me.

Equinox & SoulCycle are scrambling to defend themselves from a gay boycott