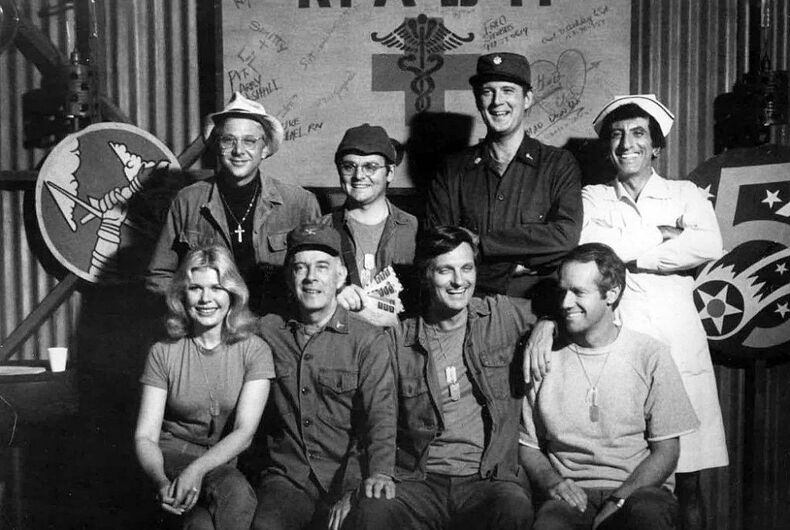 The 1977 cast of M*A*S*H. Corporal Klinger is top-left.Photo: Promo image via Wikipedia

Roy Moore told a group of Alabama Republicans that M*A*S*H was a great show that would be totally different today now that transgender people are allowed in the military, even though that’s not true.

Moore is well-known in Alabama politics for losing his job twice as the chief justice of the state supreme court. He was first removed in 2003 for defying a federal court order by displaying the Ten Commandments in court, and he was suspended in 2016 for encouraging state officials to ignore the Supreme Court ruling that legalized marriage equality.

He also ran for U.S. Senate in Alabama last year and lost after multiple women came forward and accused him of sexual assault and making inappropriate advances toward them when they were minors.

But he’s still on the GOP speaking circuit, which, in Alabama, includes the Dekalb County Republican Breakfast Club. This past Saturday, he was asked about LGBTQ rights (specifically civil unions), which led to a long rant that somehow made its way to the 1970’s sitcom M*A*S*H.

“You know, the LGBTQ-VRSTUV, I don’t know what it is – LGBTQ, when they first came out, I said, ‘Transgender? Never. That’s dumb,’” Moore said, showing how he maturely reacts to learning that sometimes other people are different.

“Do you know what transgender is? That’s not Biblical. If that’s Biblical – God created man and woman. And when men want to be women?”

“I was watching M*A*S*H the other day – talking about Korea, Vietnam,” he added.

M*A*S*H was famously about American soldiers stationed in South Korea and did not take place in Vietnam at all.

“I was watching M*A*S*H, talking about what’s his name – Klinger. He wanted to get out of the Army because they didn’t accept transgender. Now, I guess he would get a promotion.”

Corporal Maxwell Q. Klinger was a character on M*A*S*H who would pull stunts to try to get discharged, including dressing in women’s clothes.

He was not transgender. At all.

The original question that brought Moore to M*A*S*H was about same-sex civil unions, a very relevant question four years after Alabama started giving same-sex couples marriage licenses. Moore said he couldn’t support them, even though his opinion doesn’t matter.

“I don’t think we should recognize it if it deals with sodomy,” he explained. “Sodomy used to be against our laws. I can’t support sodomy. I can’t support it. If a Christian supports sodomy, I wonder what the reason would be.”

If the Dekalb County Republican Breakfast Club sounds familiar, that’s because another Alabama Republican made headlines earlier this year there.

John Merrill, who’s running for U.S. Senate, told the breakfasting Republicans that there’s no good TV anymore – like I Love Lucy and Bonanza – because “We’re too interested in homosexual activities” nowadays.

So it turns out that there’s a group of conservatives that meets in Alabama to mope about how TV was better before the queers ruined it.