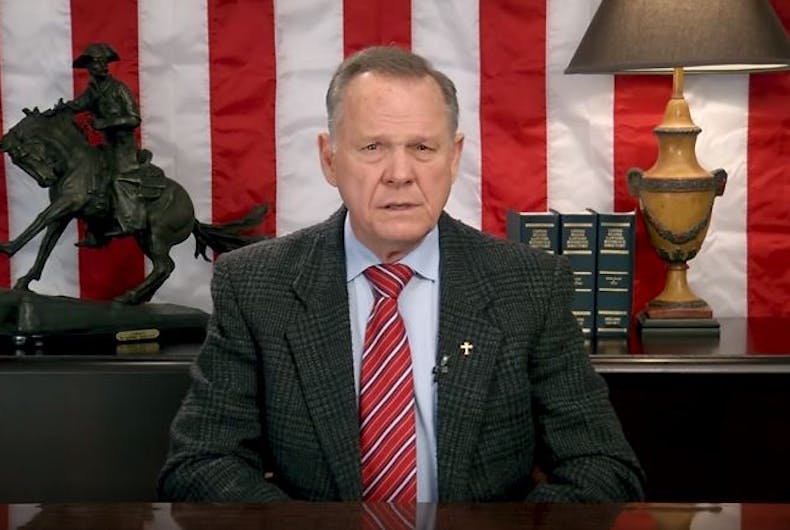 Just to remind you of what the modern GOP has become: a Republican Supreme Court nominee accused of attempted rape is now being defended by a Republican former Senate candidate accused of pedophilia.

Former Alabama Supreme Court justice Roy Moore has leapt to the defense of Brett Kavanaugh, who has been accused of trying to force himself on a young woman when they were both teenagers. Moore lost an unloseable campaign last year after nine women came forward and accused him of sexual misconduct. Among them was one woman who said that Moore sexually assaulted her when she was 14.

Where most people see parallels between Kavanaugh’s situation and that of Supreme Court Justice Clarence Thomas, who was also credibly accused during his confirmation hearings of sexual harassment. Moore thinks the better analogy is his own campaign.

“They know what’s happening,” Moore said. “It’s so obvious that these tactics are used just days before a very important event… before an election or a confirmation.”

No doubt Moore is thinking about how the decades-old accusations against him finally surfaced during his Senate campaign. But Moore is also echoing a talking point widely used by Kavanaugh’s defenders. They see the accusations as nothing more than a Democratic plot to derail Kavanaugh’s nomination to the Supreme Court.

Religious right minister Franklin Graham tweeted that “The accusations have shaken up proceedings—which is just what Judge Kavanaugh’s enemies on the liberal left hoped for.”

Of course, that’s essentially the position of the Republicans on the Senate Judiciary Committee. After some initial confusion, they have closed ranks around Kavanaugh and are clearly intending to muscle through his nomination next week.

They’ve given Christine Blasey Ford, the woman who made the accusation, a take-it-or-leave-it deal of appearing next Monday. They will not allow an FBI investigation nor any other witnesses as the proposed hearing.

Ford hasn’t indicated if she’ll testify. With the deck stacked against her, she has reason to pass. She’s already subject to slanderous (and false) accusations across the right-wing internet. She has had to move out of her house due to death threats and had her email hacked.

Meanwhile, Republicans continue to portray Kavanaugh as the victim. Summing up the prevailing sentiment among conservatives, President Trump said, “I feel so badly for him that he’s going through this.”

You can buy a Stormy Daniels comic book now. Can you guess her superpower?