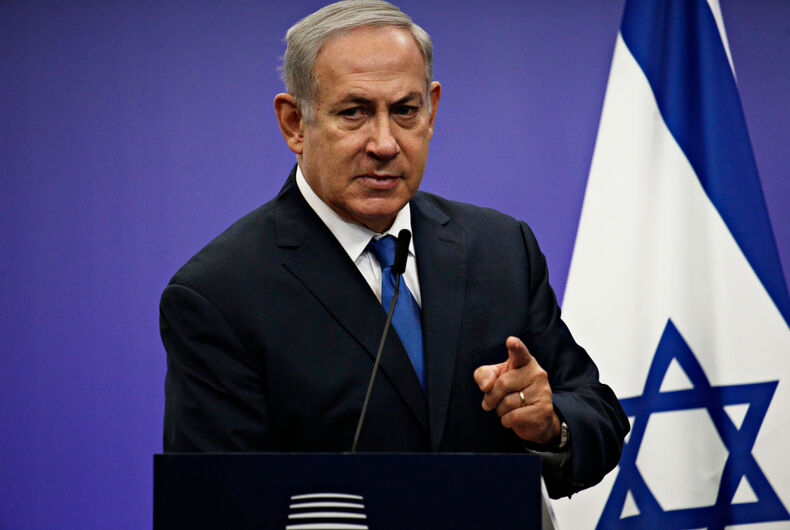 “It would show great weakness if Israel allowed Rep. Omar and Rep.Tlaib to visit. They hate Israel & all Jewish people, & there is nothing that can be said or done to change their minds. Minnesota and Michigan will have a hard time putting them back in office. They are a disgrace!”

Just hours after Donald Trump vomited this tweet yesterday, Israeli Prime Minister Benjamin Netanyahu officially banned the Congresswomen from entering Israel as they had planned. The representatives had intended to conduct a fact-finding and humanitarian mission to Israel, traveling to the West Bank cities of Bethlehem, Hebron, and Ramallah, and to visit Jerusalem.

While there, they expected to meet with Israeli and Palestinian human rights groups, humanitarian workers, young people, and to visit a hospital in East Jerusalem that has been seriously affected by recent cuts in U.S. aid to the Palestinians under the Trump administration.

In anticipation of traveling to the West Bank, Rep. Tlaib had hoped to see her family who live there.

Omar and Tlaib are among a group of first term Congresspeople who have been very critical of Trump and his policies. Being unable or unwilling to ignore or trying to smooth over relations with his critics, Trump has used Omar and Tlaib, along with their allies Reps. Alexandria Ocasio-Cortez (D-NY) and Ayanna Pressley (D-Mass.) — collectively known as “The Squad” — as a punching bag to fire up his base and to go after the entire Democratic Party.

One mouth earlier on July 15, 2019, Trump tweeted, “We all know that AOC and this crowd are a bunch of Communists, they hate Israel, they hate our own Country, they’re calling the guards along our Border (the Border Patrol Agents) Concentration Camp Guards, they accuse people who support Israel as doing it for the Benjamin’s,….”

Netanyahu’s claims that he, like any head of state, has the right to prevent anyone, in this instance the two U.S. Representatives, from coming to Israel because they wish to destroy his country. Similarly, the United States barred entry in 2012 to Israeli Knesset member Michael Ben Ari, reportedly because of his membership in Kach, a banned anti-Arab terrorist group.

Netanyahu points to both women who support the boycott, divestment, and sanctions (BDS) movement against Israel and who voted for legislation that would make it U.S. policy to boycott Israel. The measure, though, was forcefully defeated 398-17 in the House.

Tlaib and Omar have continually refuted holding any animosity toward Jews or Israelis and have said their criticisms of the Israeli government are based on policy disagreements.

Controversy though swirls around Omar. In 2012 she tweeted: “Israel has hypnotized the world. May Allah awaken the people and help them see the evil doings of Israel.” This year, she wrote that U.S. support for Israel was “all about the Benjamins baby,” signifying Benjamin Franklin who appears on the $100-dollar bill.

A few weeks later, she told an audience in D.C. that “I want to talk about the political influence in this country that says it is O.K. to push for allegiance to a foreign country.” Confronted about this latter remark by her Democratic colleague, Nita Lowey, Omar replied, “I should not be expected to have allegiance/pledge support to a foreign country in order to serve my country in Congress or serve on committees.”

Explaining the reasoning behind an expanded House of Representatives resolution against intolerance and defending Omar, Speaker Nancy Pelosi told a crowd of reporters, “I feel confident that her words were not based on any anti-Semitic attitude, but that she didn’t have a full appreciation of how they landed on other people where those words have a history and a cultural impact that might have been unknown to her.”

Pelosi quite possibly may be correct that Omar “didn’t have a full appreciation of how [her words] landed on other people.” Perhaps she did not know the stereotypes and tropes targeting Jews. Maybe Omar did not intend to offend. How can we truly know her motives?

What we do know, however, is that Netanyahu and other right-wing politicians like Trump rule by fear and division. They are hardliners who promote intolerance, hatred, xenophobia, and racism.

Only four days prior to the 2015 Israeli election, Netanyahu and his Likud Party were trailing in the polls. Just 48 hours before the election, Netanyahu, as a last-ditch desperation effort, finally told his truth: that he would never support the establishment of a Palestinian state “on his watch,” while increasing Israeli’s so-called “settlements” on the West Bank. Netanyahu-watchers had long suspected what turned out to be his previously voiced disingenuous interest in a “two-state solution.”

Netanyahu has turned Israeli democracy into a platform of hate and suspicion by warning his right wing supporters that the opposition parties had been bussing politically left-leaning Israeli Arabs to the polls “in droves.”

Netanyahu’s brand of extremism is a terrible thing for Israel, for the Middle East, and for the world, but not much different from the GOP in the United States, which also campaigns and rules (not governs) on a platform of hate, fear, and division.

I wonder whether Netanyahu will now ban me from visiting my family in Israel.

The hallmark of great democratic societies rests on their willingness to engage in dialogue and discussion around important and controversial issues. It is in their ability to protect the rights to freedom of speech and conscience.

Great democracies embrace rather than stifle ideas. Societies fall from within when autocrats and oligarchs clamp down on people’s voices and their basic human rights to self-determination and self-respect, as we are now witnessing in Hong Kong.

With only weeks before the Israeli repeat election on Sept. 17, Netanyahu is fighting a nasty battle to stay in office. The barring of Omar and Tlaib has more to do with his attempts to appear strong to his fractured right-wing coalition than it does about protecting his country.

Israeli’s Interior Minister relented by permitting Rep. Tlaib to visit her 90-year-old grandmother in the West Bank, although Tlaib declined the offer.
“Silencing me & treating me like a criminal is not what she wants for me. It would kill a piece of me,” she tweeted. “I have decided that visiting my grandmother under these oppressive conditions stands against everything I believe in–fighting against racism, oppression & injustice.”
Commentary
Benjamin Netanyahu, Donald Trump, Ilhan Omar, Rashida Tlaib