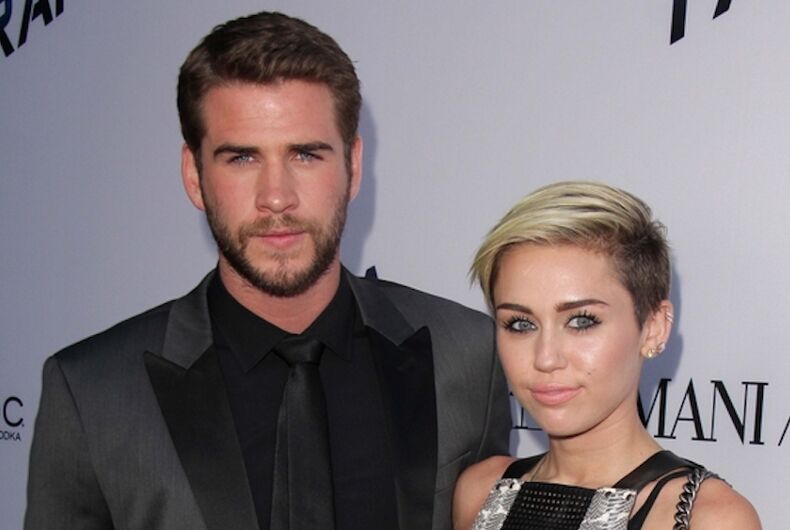 “Liam and Miley have agreed to separate at this time. Ever-evolving, changing as partners and individuals, they have decided this is what’s best while they both focus on themselves and careers. They still remain dedicated parents to all of their animals they share while lovingly taking this time apart. Please respect their process and privacy.”

The two first met in 2008 on the set of The Last Song, a teenage coming-of-age romantic comedy. They began dating and got engaged in 2012 but called it off in 2013, remaining broken up for three years afterwards.

During a 2016 interview with Ellen DeGeneres, however, Cyrus confirmed getting back with and re-engaged to Hemsworth. They reportedly married in a small private ceremony in Nashville, Tennessee in December 2018.

I’m in a hetero relationship, but I still am very sexually attracted to women…. I made a partner decision. This is the person I feel has my back the most. I definitely don’t fit into a stereotypical wife role. I don’t even like that word.

According to People, both Cyrus and Hemsworth have recently been photographed without either of them wearing their wedding bands. Hemsworth has reportedly “been spending time with his family, including brother Chris Hemsworth, in his native Australia.”

In a 2017 interview, Cyrus said that Hemsworth doesn’t like being identified as a “straight guy.” Hemsworth has also spoken in favor of marriage equality in his home country of Australia.

College kicks out trans student for having top surgery