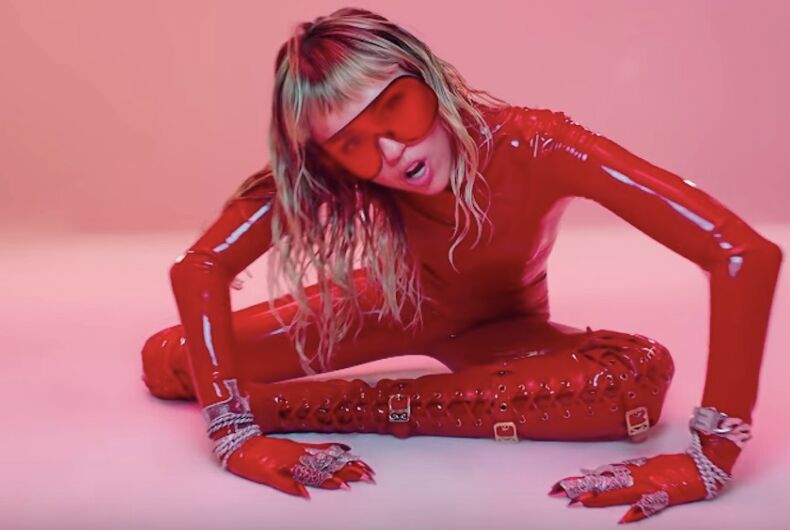 In the video, Cyrus returns to a hip-hop sound, wearing a right red latex suit while singing:

Every day of the week I’ma do ya …

look at her, she got the power …

Don’t f*ck with my freedom,

I came back to get me some,

Must be something in the water or that I’m my mother’s daughter.”

During the video, slogans appear onscreen like “Every woman is a riot,” “You are f*** beautiful,” “Virginity is a social construct” and “Sin is in your eyes.”

Cyrus — who identifies as queer, pansexual and gender fluid —has long spoken in favor of LGBTQ rights and identity. They got an equal sign marriage equality symbol tattooed on their ring finger in 2011 and got banned from the Dominican Republic for “inciting lesbian sex” through their music in 2014.

In two 2015 interviews, Cyrus said that they felt “like a 15-year-old boy trapped in the body of a 22-year-old girl” and that they informed their mother of their dual attraction to boys and girls at age 14.

That same year, Cyrus launched the Happy Hippie Foundation to help homeless and LGBTQ youth, attended the American Foundation for AIDS Research’s sixth annual Inspiration Gala with a “queer, biracial, agender” date, and performed with drag queens from RuPaul’s Drag Race at the end of the MTV Video Music Awards.

As for her video’s co-stars, Baker has spoken out about wanting to be a role model for butch girls. She has said, “I’m more than just a girl who skates. I’m queer. I present as more masculine. A lot more girls can relate to that than if I was just feminine.”

McArthur began transitioning and went from female modeling to male modeling at age 16, and has since “landed campaigns with Kenneth Cole and Milk Makeup, photoshoots for Interview and W and walked for the likes of Coach and Marc Jacobs at New York Fashion Week,” according to Mic.com.

Philip, an 18-year old model with cerebral palsy, appeared on the cover of Paper magazine for one of its seven Pride issues this week honoring Pride. She joined Elite Model Management in September 2018.

Little Miss Flint has advocated for environmental justice in Flint, Michigan after its largely black population had its water supply polluted by conservative political mismanagement in 2014.

Here’s the “Mother’s Daughter” video below: