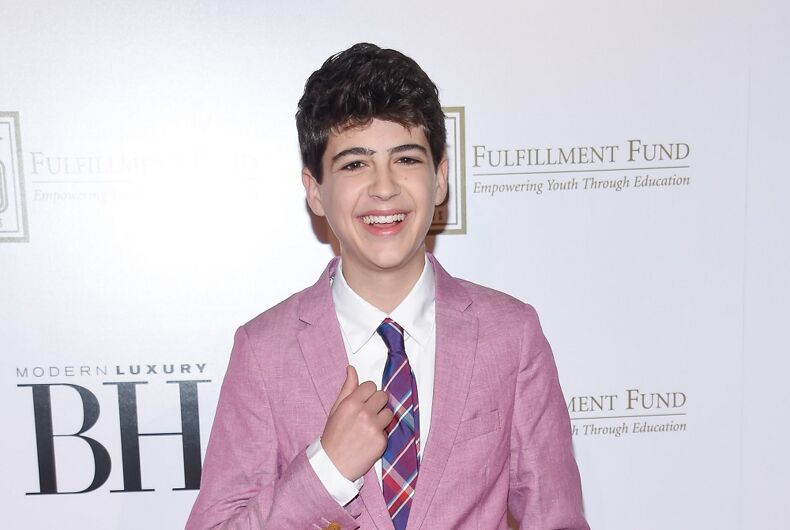 A Disney Channel star has just come out as bisexual.

Now that the series is over, he’s talking about his identity.

Related: Two guys kissed on a Disney Channel cartoon & it was no big deal

On Twitter, he wrote that the first person who responds to his tweet is bi. Then he responded immediately with “i’m bi.”

first! i win! it's me. i'm bi. And now that I've said that, I have a few things to rant about. There are more important things to talk about than me liking a whole bunch of genders, but I do want to share a few things with you guys.

“How ironic, isn’t it, that me, playing that character, never had mustered up that courage?”

Instead of feeling the courage to tell you today that I am an out and proud bisexual man because of the character I played for four years, I feel that courage thinking of all of you, who felt emboldened by Cyrus to come out.

He said that he was inspired by his fans to come out after spending years dealing with his own internalized homophobia.

I stuffed the existential crisis of talking about my sexual orientation into a box in my mind for years. Today, I release it into the world.

Rush also encouraged his fans to read up on bisexuality on the GLAAD website and to donate to the Trevor Project, which fights LGBTQ youth suicide.

I also want to ask you to donate to The Trevor Project, who are literally saving lives every day. Helping young LGBTQ+ voices feel heard and loved is utterly crucial.https://t.co/jAgqEukuyh

This gay Republican ran for governor of a red state. Now he’s behind bars for shooting a man.