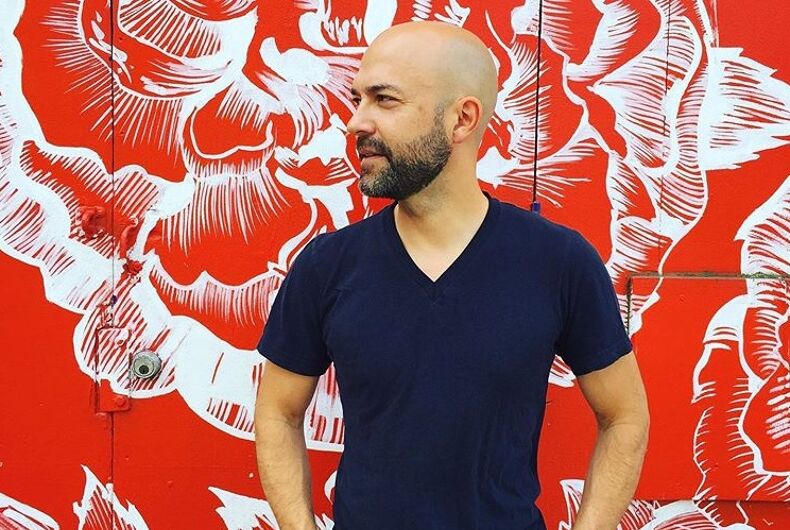 A formerly anti-gay pastor has transformed his life and is now asking LGBTQ people for forgiveness. Joshua Harris used to be the pastor of the Covenant Life Church in Gaithersburg, Maryland, and is a bestselling evangelical author.

He is best known for his 1997 hit I Kissed Dating Goodbye, a book that was popular in the sexual purity movement and advocated giving up dating in favor of what he called “courting,” which basically meant group dates and the involvement of a woman’s parents in the process that was geared towards marriage and did not involve premarital sex.

But now he has turned his life around, so much that he marched in Vancouver Pride this weekend.

Related: This aspiring gay pastor’s impassioned plea for acceptance is rocking the internet

The former pastor shared several photos of himself at Pride on Instagram, the Christian Post reports. He posted a picture with Matthias Roberts, the host of Queerology: A Podcast on Belief and Being and gay singer Trey Pearson. He had a rainbow cake in another.

The change in his life started long before this weekend. Three years ago, Harris denounced his book, which he said was a “huge mistake.” A year later he gave a TED talk where he said that the book was based on his fears of sex and getting hurt in relationships.

Last month, he posted an Instagram story saying that he and his wife were separating and “will continue our life together as friends.” He had previously written in his book that dating was “a training ground for divorce” and that having sex before marriage would make it difficult for people to commit to each other.

Then he posted that he would no longer call himself a Christian and apologized to LGBTQ people.

“To the LGBTQ+ community, I want to say that I am sorry for the views that I taught in my books and as a pastor regarding sexuality,” he wrote. “I regret standing against marriage equality, for not affirming you and your place in the church, and for any ways that my writing and speaking contributed to a culture of exclusion and bigotry.”

“I hope you can forgive me.⁣⁣”

My heart is full of gratitude. I wish you could see all the messages people sent me after the announcement of my divorce. They are expressions of love though they are saddened or even strongly disapprove of the decision.⁣⁣ ⁣⁣ I am learning that no group has the market cornered on grace. This week I’ve received grace from Christians, atheists, evangelicals, exvangelicals, straight people, LGBTQ people, and everyone in-between. Of course there have also been strong words of rebuke from religious people. While not always pleasant, I know they are seeking to love me. (There have also been spiteful, hateful comments that angered and hurt me.)⁣⁣ ⁣⁣ The information that was left out of our announcement is that I have undergone a massive shift in regard to my faith in Jesus. The popular phrase for this is “deconstruction,” the biblical phrase is “falling away.” By all the measurements that I have for defining a Christian, I am not a Christian. Many people tell me that there is a different way to practice faith and I want to remain open to this, but I’m not there now.⁣⁣ ⁣⁣ Martin Luther said that the entire life of believers should be repentance. There’s beauty in that sentiment regardless of your view of God. I have lived in repentance for the past several years—repenting of my self-righteousness, my fear-based approach to life, the teaching of my books, my views of women in the church, and my approach to parenting to name a few. But I specifically want to add to this list now: to the LGBTQ+ community, I want to say that I am sorry for the views that I taught in my books and as a pastor regarding sexuality. I regret standing against marriage equality, for not affirming you and your place in the church, and for any ways that my writing and speaking contributed to a culture of exclusion and bigotry. I hope you can forgive me.⁣⁣ ⁣⁣ To my Christians friends, I am grateful for your prayers. Don’t take it personally if I don’t immediately return calls. I can’t join in your mourning. I don’t view this moment negatively. I feel very much alive, and awake, and surprisingly hopeful. I believe with my sister Julian that, “All shall be well, and all manner of thing shall be well.”

“If persons do continue in their repudiation of Christianity, then we have to remember the text 1 John 2:19 where we are told that, ‘They went out from us, because they were not of us,’ which is to say they never were truly Christians,” Mohler said. “They were pretend believers.”

Others have criticized him on social media.

Joshua Harris @HarrisJosh has made his apostasy very public. He's denied Christ. He's blasphemed God's Law and Gospel. He's become an evangelist for apostasy and homosexuality. These are not neutral or innocent acts. He's declared war against Christ and the souls of men. pic.twitter.com/ht3Axnz3bA

The Joshua Harris story is simply heartbreaking. I happen to agree w/most of what he wrote in his book I KISSED DATING GOODBYE. To see him slide to where he now is painful. Let's pray for this man! And thank you @LarryTaunton for clarity on this subject. https://t.co/Mgv76Bv8VX

Harris, though, said the he would not be silent. He posted on Instagram that it is important “to refuse to disappear.”

“To live my life. Hold my head up. Look my Christian friends in the eyes and smile when I pass them on the sidewalk. Even the seemingly insignificant act of posting a picture on Instagram is important for me.”

That old Bukowski poem has been ringing in my ears. “If you’re going to try, go all the way. Otherwise, don’t even start.” ⁣ ⁣ Well, I’ve started. But there is a long road ahead. ⁣And maybe a cold park bench. ⁣ Two seemingly contradictory things are important for me right now: ⁣ ⁣ First, to refuse to disappear. To live my life. Hold my head up. Look my Christian friends in the eyes and smile when I pass them on the sidewalk. Even the seemingly insignificant act of posting a picture on Instagram is important for me. To say I’m here, I’m alive, I’m not ashamed. ⁣ ⁣ Second, to sit in quietness and be silent. The inner journey that I’m on isn’t something that I need to broadcast. Which is why I’m not engaging in public arguments online. It’s why I’m not doing any interviews with the media. It’s why I’m not writing a book or starting a podcast. I want connection and relationships and dialogue with real people. But I need to avoid audiences and the pressure of becoming a spokesperson for anyone or any cause. That has gotten me into trouble in the past. ⁣ ⁣ Your letters and stories have been such an encouragement. Your forgiveness has meant so much. I am reading what you’ve written even if I can’t always respond. To know you’ve walked this road or are just starting out has been a gift. I am learning from you and I feel less alone.