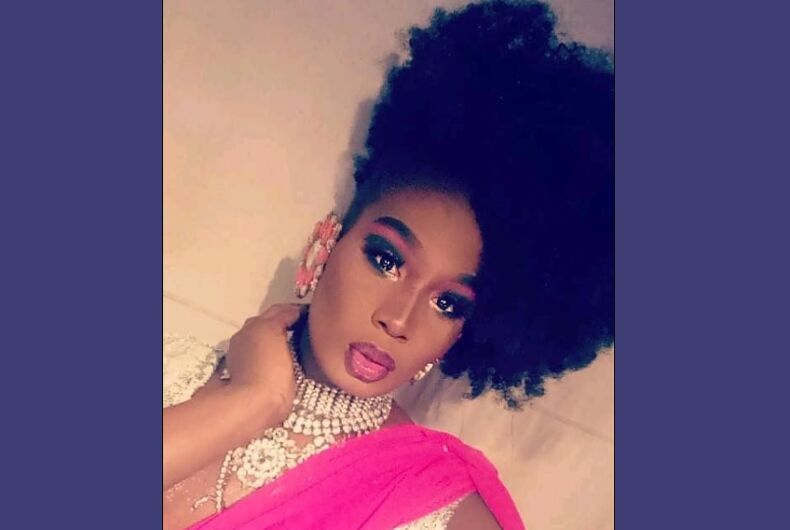 A transgender woman who works at a D.C. gay bar was brutally attacked and robbed at a convenience store. Alicia Love is a manager at the D.C. Eagle and she has performed in drag shows around the city.

Last Friday, after getting off work at 3 a.m., she went to a Citgo gas station to get a snack. As she was walking, a group of men shouted slurs at her.

“As I’m going to the gas station I walked past a group of seven guys and they were calling me names like tranny, he-she, faggot,” she told the Washington Blade. “I ignored it and I stayed focused on where I was walking.”

But she saw that she was being followed. Then the men approached her.

“And basically, they started saying give me your purse, give me your stuff, and I was like leave me alone, I don’t want any problems,” she said.

Related: DC dentist fixes hate crime victim’s shattered teeth for free to give back to community

“So, before I could say anything more they ran up on me, all seven of the guys, and they jumped me,” she said. “And I fell to the ground and they started to kick me and punch me and kick me in my face and called me names: tranny.”

They took her purse, but found that there was nothing in it. She keeps her money in a belt bag around her waist.

She ran to the gas station for safety and tried to get the attention of the cashier, who was enclosed in a booth.

“I told him they’re coming after me, can you please let me in,” she said. “I’m like I need help. So, he looked at me and ignored me.”

Three of the men went in and attacked her.

She had already managed to call 911 and said that she was in “disbelief” as the men ran away.

“I just came out of the gas station and fell on the ground and started to cry,” Love said. “I just didn’t know what to do. I was crouched up. I was bruised up.”

The police arrived and the former head of the LGBT Liaison Unit was there. They took a report and she refused to be taken to the hospital, and an officer drove her home.

She was left bruised and bleeding and said that the men took $300 in cash, her phone, her bank card, and her ID. The report says that the attack is a possible hate crime.