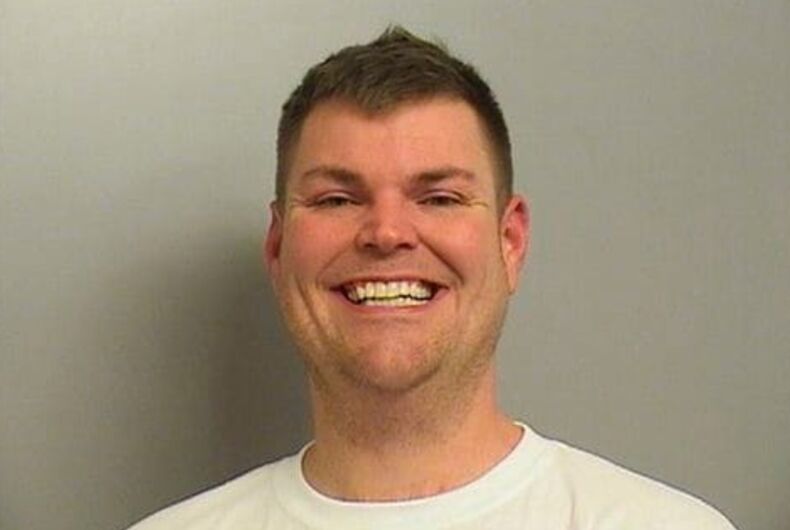 Christopher Barnett, a gay former GOP candidate for governor of Oklahoma, has been arrestedPhoto: Mugshot

Christopher Barnett is not your typical Republican and he’s had one helluva week, but he’s still all smiles.

The married gay man ran for governor of Oklahoma and was trounced in the election. Barnett was also arrested twice within hours last week, but still managed to announce his candidacy for the Senate in 2020 in between stints in the slammer.

Oh, he also runs a marijuana cultivation company. Not that there’s anything wrong with that part of this story.

First he shot a process server trying to hand him an eviction notice. After putting down $75,000 out of jail, he was arrested again hours later for threatening a mass shooting at a university football game. He is being held without bond.

Barnett pleaded not-guilty to two felony charges, saying his actions are perfectly legal. In fact, he’s so confident that he’s in the right, he couldn’t stop grinning for his mug shot.

“Why am I smiling?” he told a local television reporter. “I’ve got beautiful teeth and I have no reason not to smile. Why in the world are you going to take a picture and not smile?”

Hours after bailing himself out of jail though, Barnett took to the internet to post a blog post detailing a “hypothetical” mass shooting at the University of Tulsa. Barnett’s husband was dismissed from the school after allegations of online harassment on social media.

Barnett claimed he was responsible for the Facebook posts, but his then-fiance was still dismissed. The men are suing the school and Barnett has regularly railed against the university on his blogs and social media.

In a post headlined, “How would Chris Barnett take down TU?” he described his vision of the perfect mass shooting, describing rigging up multiple guns to open fire at the same time in a crowded football stadium.

He added a disclaimer to the post that read, “This is all hypothetical and not a threat and of course will never happen, but it’ll drive the far left crazy so here it goes” before launching into a list of 22 ways to carry out mass murder.

Barnett’s lawyer argued that his blog posts are protected under free speech laws and since it was only a hypothetical scenario, he can’t be prosecuted. In interviews with local media, Barnett said he shot the process server in self-defense after the man pulled a gun on him and will use the state’s “Stand Your Ground” law as an attempted defense.

The video of the confrontation shows the process server leaving Barnett’s front step after speaking to him through the door. He is halfway across the yard when Barnett shoots him. He did not have a gun in his hands.

Still, Barnett insists he’s going to run for the Senate and that he’ll win with the support of big-money backers.

“I have a war campaign chest of $25 million,” he told the TV station. “And I intend to win this next election.”

Hundreds of LGBTQ families came together & OMG would you look at these photos of cute kids?!