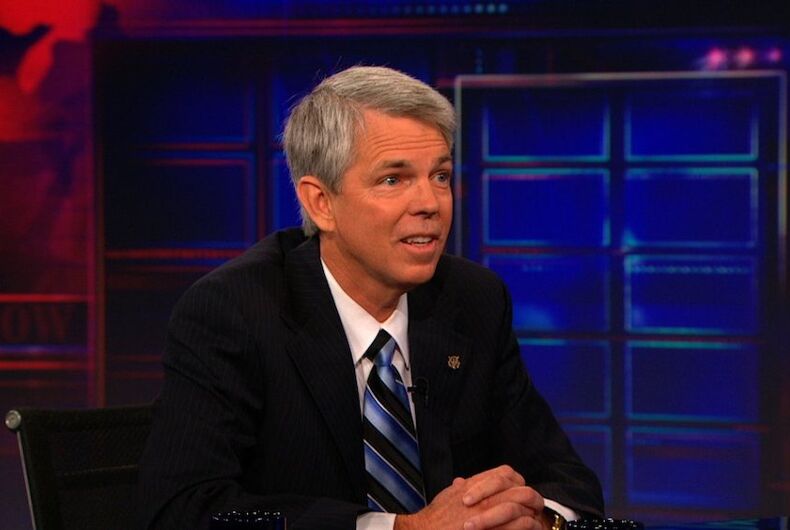 Hate group leader David Barton is at it again. On his podcast WallBuilders Live he said that religious American are entitled to “more protection” under the Constitution’s First Amendment.

Barton also considers himself a “historian,” despite being shunned by academics and accused of practicing misleading historical revisionism, “pseudoscholarship” and spreading “outright falsehoods.” His last book was withdrawn from sale by the publisher who had to apologize and admit the “basic truths just were not there.”

Before we get into Barton’s weird “logic,” let’s read what the First Amendment actually says:

“Congress shall make no law respecting an establishment of religion, or prohibiting the free exercise thereof; or abridging the freedom of speech, or of the press; or the right of the people peaceably to assemble, and to petition the Government for a redress of grievances.”

It’s pretty straightforward: The government won’t help establish a “major” religion or prevent anyone from practicing their faith, saying what they want, gathering in groups or urging the government to change things.

Related: With all due respect, Mr. Barton — ‘Go f*ck yourself!’

Here’s his exact words uttered on his podcast:

“[The First Amendment] gave me more protection because I get my speech but if it’s religious, I get it twice, and if it is religious with others, I get it three times. In addition to free speech, there is also free exercise of religion, which often involves free speech. For me to exercise my faith means I will speak about it, I will live it out, I will activate it, I will do it. And, by the way, I have the right to assembly, so I can get together with other believers and we can act out our faith … While religious folks have at least three different forms of protection under the First Amendment for their speech, secular folks have their protections as well for speech and assembly, but they just don’t have the same religious motivations.”

This is, to put it lightly, bunk. The Supreme Court has often interpreted the Constitution to favor religious speech over secular life — in fact, Barton got off on this tear while discussing its recent decision to let a 40-foot-tall concrete cross stand at an otherwise secular World War I memorial — but that neither means that it was expressly written to favor religion nor that it should.

Of course, this is the sort of dumb reasoning we’ve come to expect from Barton, a man who has made his career verbally bashing the gay community but also manipulating reality to suit his beliefs.

Meet the ‘Deplorable Choir.’ They’re even more awful than their name suggests.