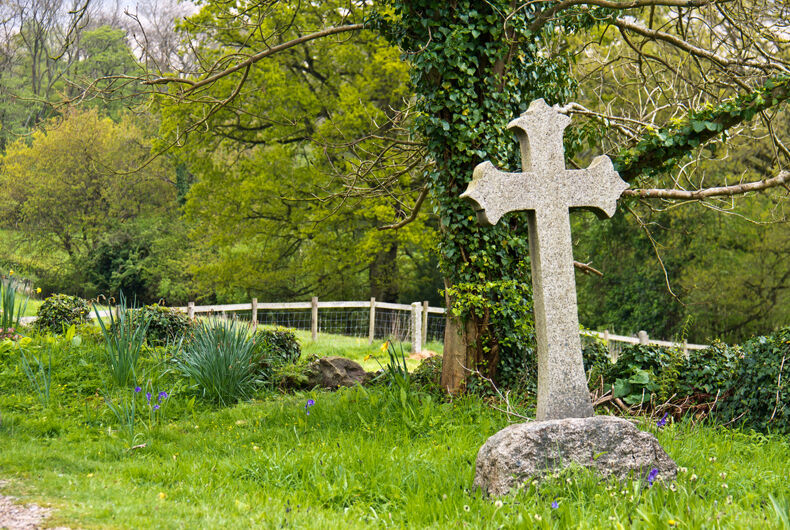 When is a clearly Christian cross on public land maintained by public tax dollars not really a religious symbol but, rather, cultural and historic in nature? The answer is when 7 out of 9 Supreme Court “justices” say so!

The case involved a 40-foot tall concrete cross, the so-called “Peace Cross,” that was donated through private funds 90 years ago honoring 49 servicemembers who died in World War 1. It stands in Bladensburg, Maryland in the center of a busy traffic intersection on land that was taken over by the state parks commission in 1961.

The Supremes rejected the claim from the American Humanist Association, which initiated a lawsuit arguing the existence of the cross on public land must be understood as a government endorsement of a single religious faith.

“For thousands of years the Latin cross has represented Christianity,” the appeals court said, and that a reasonable observer could conclude that the government “either places Christianity above other faiths, views being American and Christian as one in the same, or both.”

The government appealed the decision to the higher court. In front of the Supreme Court, state parks commissioners defended the cross as a memorial designed to emulate cross-shaped markers on the graves of American servicemembers overseas. As a result of World War I, it said, crosses became the cultural symbol of the fallen, as depicted in a popular poem of the war:

“In Flanders fields the poppies blow/ Between the crosses, row on row.”

So, if the cross no longer represents religion, what is the new symbol of Christianity? And since the Supremes failed to place their judgment upon the nature of the Star of David and the Islamic crescent, for example, then do these continue to represent their respective faiths?

Ruth Bader Ginsburg, one of the two dissenters along with Sonia Sotomayer, wrote that the court’s decision to maintain the cross-shaped monument on public land “erodes” the constitutional principle that “demands governmental neutrality.”

This decision clearly violates the First Amendment’s injunction against the government endorsement of religion, as do publicly paid chaplains who recite religious prayers in Congress, religious invocations at Presidential inaugurals, the placement of “God” on our coins and paper currency, and in the Pledge of Allegiance.

The United States clearly privileges Christianity and, in particular, Protestant forms over all others.

He found a country, founded on an overriding commitment to democracy, liberty, freedom, human dignity, and egalitarian values, coexisting alongside deep-seated patterns of racial discrimination, privileging white people while subordinating people of color. While racism most certainly remains, this contradiction has been powerfully reframed for contemporary consideration by religious scholar, Diana Eck.

The new American dilemma is real religious pluralism, and it poses challenges to America’s Christian churches that are as difficult and divisive as those of race. Today, the invocation of a Christian America takes on a new set of tensions as our population of Muslim, Hindu, Sikh, and Buddhist neighbors grows. The ideal of a Christian America stands in contradiction to the spirit, if not the letter, of America’s foundational principle of religious freedom.

“Hegemony” describes the ways in which the dominant ruling group successfully disseminates its particular form of social reality in such a manner as to be accepted as common sense, as “normal,” even by those who are marginalized and disempowered. According to educator and social activist Weinbaum, “[H]egemony is a means for social control, not through overt force, but rather through covert tactics, dictating society’s norms.”

One form is “Christian hegemony,” which is the overarching system of advantages bestowed on Christians. It is the institutionalization of a Christian norm, which establishes and perpetuates the notion that all people are or should be Christian thereby privileging Christians and excluding the needs and life experiences of people who are not Christian.

Often overt, though at times subtle, Christian hegemony is oppression by intent and design, but also it comes in the form of neglect, omission, erasure, and distortion.

No amount of double-speak gobbledygook word spinning by the Supremes or anyone will alter the fact that a 40-foot cross dedicated to fallen servicemembers represents anything other than the Christian faith!

So, let’s be honest and clear. Either enforce the First Amendment’s doctrine separating government and religion (rather than “Church and state” since primarily only Christian houses of worship are referred to as “churches”) or excise the clause from the Constitution.

If the United States was and continues to serve as a “Christian nation” or as a Christian theocracy, say this in open, clear, and honest terms. If, on the other hand, our nation was and is intent upon ensuring religious freedom and the freedom not to follow any religious faith, then get the government out of the business of enforcing Christian privilege.

Pride in Pictures: It’s illegal to hold a Pride parade in Moscow