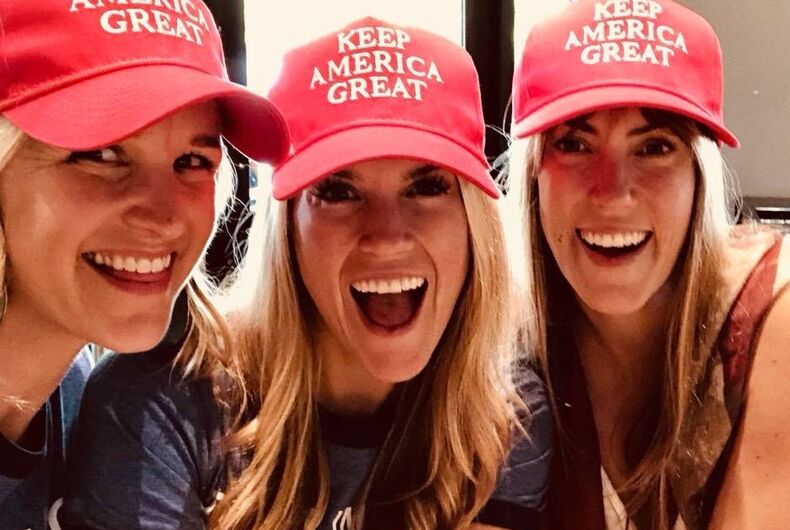 Though it’s wacky and certainly over-the-top, it isn’t a “Saturday Night Live” parody skit. Though it covers every Trumpian right-of-logic talking point, it doesn’t come from the press office of the West Wing nuts.

And while it mimics the lyrics and tunes of a country music band or a Christian religious music revival trio, the Nashville music industry and God elites would do well to create a wide berth.

This non-parody, unskillfully produced and performed, badly written to the extent that it wouldn’t have a chance of winning runner-up in a cereal box song writing contest, torturously harmonized cliché of political theater is none other than the latest girl band to hit the partisan scene called The Deplorable Choir. The group’s name is a self-righteous embrace of the term Hillary Clinton used to describe racist Trump supporters during the 2016 presidential campaign.

They cover every talking point that has risen from Trump’s takeover of the Republican Party, from its pro-life-until-birth-then-you’re-on-your-own in the name of “freedom” mantra, to its lock-step embrace of the NRA and regulation-free ownership of firearms, to its America-love-it-or-leave-it and you-must-support-our-fascist-platform-to-be-worthy-of-the-title “Patriot” pledge of allegiance.

Also included in the lyrics of “Can You Say Winning?,” the Deplorables include other items in the list of Trumpian “victories”:

That witch hunt has more holes
Thanks to Judge Ellis
Caught 5 men from ISIS
What more can you tell us?
Moved that embassy out to Jerusalem
God Bless Trump
And all that he’s doin’!”

Did you catch that totally awesome rhymin’ (Ellis – tell us; Jerusalem – doin’)?

Here’s just a few of the “songs” from The Deplorable Choir’s mein musical kampt playbook:

“Brick By Brick” shows choir members constructing a great border wall from yellow cardboard toy bricks, which more than likely would “secure” the southern border just as well as concrete and steel. The happy workers in the video are reminiscent of the Disney cartoon film “Snow White” as our heroin organizes the over-excited ecstatic six Dwarfs – with the seventh, Grumpy being, well, Grumpy – busily cleaning and scrubbing the homestead.

Why Are You Still Here?

As the song’s title indicates, the Choir ponders the question of why Hillary Clinton remains on planet Earth after she lost the Presidency to their righteous leader, Lord Donald of Trump.

I know she’d like to think she’d have my vote
If it weren’t for my husband
But today we’re setting her real straight
That we were the ones to choose
We might be just white bimbos
But we know we don’t like YOU!

Just a silly song to Hillary Clinton! “Why are you still here?” All in fun…we don’t actually hate her, just strongly dislike her 😜PLEASE SHARE! Facebook CENSORED our last upload of this video!!! SAD!!! Were they afraid some no-name, SILLY, conservative group was going to hurt Hillary’s feelings? Unreal! Please share this with a message LOUD AND CLEAR that conservatives SHOULD NOT be censored just because you DISAGREE with our opinion!!! AND PLEASE HELP US GET THIS STRAIGHT TO HILLARY’S INFAMOUS INBOX!!! I’d love for her to get the message! LOVE, a mad conservative-Trump supporter!

Why Is David Your Face for Gun Control?

In the Choir’s deplorable and unpardonable attack on David Hogg, a student survivor of the deadly Parkman High School shooting massacre in Florida, the trio reaches the lowest depths of bad taste and incivility:

Why is David your face of gun control?
His secret that no one seems to know
He only finished puberty not long ago
And now he’s
SCREAMING
CRYING
CUSSING
RUNNING YOUR SHOW!

The Choir argues that David needs to enter therapy, and it concludes that “someone needs to spank him now,” thus adding trauma to trauma.

A song for Mark Zuckerberg! There may be a little diamond and silk and deplorable deb in here! Just saying! Geeee whizzz funny how many people are taking us being GOOFY so seriously! 🤪🤪And ps, mom…it’s just a play on words! All in fun! Please feel free to share! 🤪🤠Red solo cup parody! Toby Keith ❤️🇺🇸#AintNoShameInOurTRUMPgame

Posted by The Deplorable Choir on Tuesday, April 10, 2018

The Choir continues its theme of inflicting a licking in this song to Mark Zuckerberg as they chant, “MUTHER ZUCKER / Come meet me out back / With my can of whoop ass.”

The choir also put out an ode to General Mike Flynn proclaiming that “You won’t bring him down / ‘Cause some things you can’t break / Because we stand by our General Flynn.”

In the song “Vote Republican,” they promise:

If you like money and a job
You have big dreams of a border wall
Or to keep your doctor and keep your gun
by God vote Republican.

Did you catch that most telling of rhymes: (gun – Republican)?

And in “Real Women Vote for Trump,” they proclaim: “We don’t need no liberal chump.”

On a positive note: these Deplorables sing out loudly, clearly, and unmistakably that the Trumpian agenda is nothing but tacky style and artifice with no underlying ability, depth, and content just like the Choir itself.

He paid two women not to disclose past affairs to silence them in advance of the 2016 presidential election, and has, in particular, viciously gone after several women of color in high positions of power with racist, xenophobic, and misogynist invectives, including Maxine Waters, Alexandria Ocasio-Cortez, Ayanna Pressley, Rashida Tlaib, and Ilhan Omar.

Nevertheless, some women have jumped aboard the Trump train and are holding on as tightly as they can as it careens perilously off track until it inexorably plummets off the cliff of patriarchal Christian white supremacy.