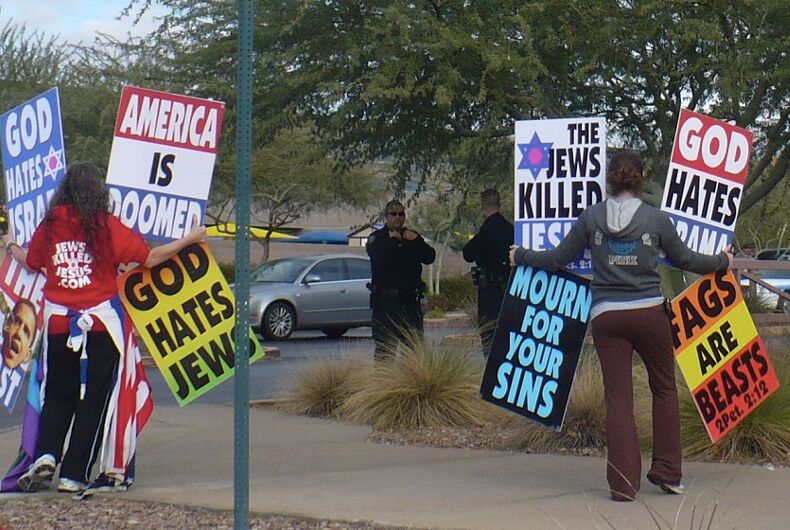 A pastor who has been banned from large swaths of the world for his hateful statements is now telling the Westboro Baptist Church to tone it down.

Pastor Steven Anderson of the Faithful Word Baptist Church is perhaps best known for saying that the victims of the Pulse shooting were “a bunch of disgusting perverts and pedophiles” and “disgusting homosexuals who the Bible says were worthy of death.” He has also been banned from 33 countries because of his hate speech.

But now he’s taking on the Westboro Baptist Church, gay-haters who have been at this game a lot longer than he has. Since 1991, the WBC has picketed LGBTQ events and military funerals with their famous signs that say “GOD HATES FAGS” and “THANK GOD FOR 9/11.”

In a sermon posted to YouTube, Anderson spoke about other churches and how they save souls and get followers.

He spends a good deal of time talking about how churches need to be more harsh with their preaching, to “tear down” in order to build up later.

But he does say that tearing down in and of itself isn’t enough.

“One famous example is the Westboro Baptist. False prophet!” he said, probably referring to WBC’s most famous pastor, Fred Phelps, who died in 2014.

“The guy had a wrong salvation, wrong gospel, wrong doctrine, not saved, total heresy. And he’s just getting up and just ripping on homos all the time. But when did he ever get up and preach the gospel of Jesus Christ? Never.”

“When did he ever have a positive message about reaching people with the gospel, winning souls, all the good things?” Anderson continued. “Never.”

“Why? because he had no fruit. He’s without fruit, twice dead, he’s a tree whose fruit withered.”

The WBC has long served Christian conservatives as an example of “real” homophobes. Christians who hated LGBTQ people could point to the WBC and say that those people are the real extremists, anyone else is somewhere in the middle.

And Anderson is doing the same thing. When he praises a mass shooter for gunning down LGBTQ people, he’s doing it to build something up. When the WBC protests military funerals because the U.S. is too accepting of LGBTQ people, they’re just tearing things down.

Because it helps extremists feel good about themselves to have someone even more extreme to point to.

How two gay guys sold everything, left home to travel the world & lived happily ever after

Almost half of Americans don’t change their undies daily. It gets even worse when we talk about men.