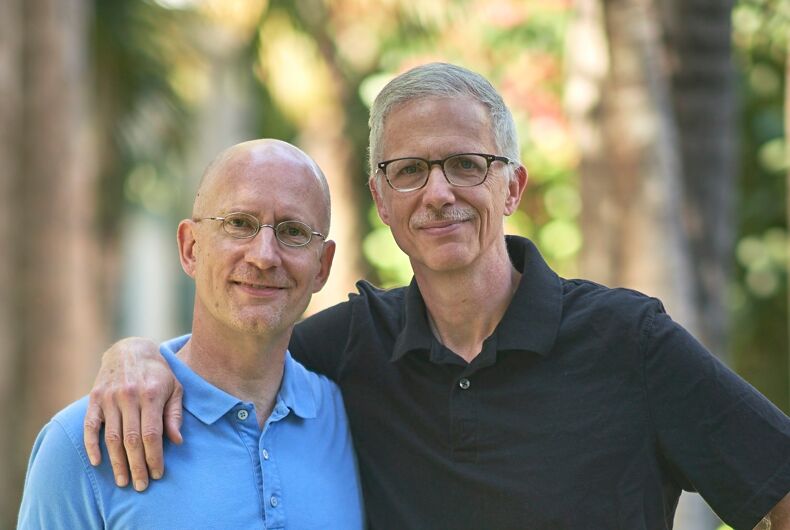 We’re a gay couple of more than two decades, and we’re both writers — Michael writes novels, and Brent writes novels and screenplays.

In 2016, we owned a nice house in Seattle with a good circle of friends, but we weren’t especially happy. It was partly our writing careers, which had both seen their share of ups and downs. It was partly the political situation in the United States, which seemed to be rapidly careening out of control. And it was partly just living in America; we didn’t realize it at the time, but almost every aspect of American culture encourages people to be busy, anxious, and lonely.

So we decided to sell our house and travel the world. The plan was to move to a new country every few months, at least until we found a place where we wanted to settle down.

We were lucky because our jobs as writers made it so we could work anywhere, as long as we had access to the internet.

We spent 2017 selling our house, downsizing our belongings, and moving our lives into the cloud.

But where would we live? Would we feel isolated? Would it be dangerous? What about the language issue? And how expensive would all this be?

It was really hard to visualize our life ahead, and kind of scary, because we’d never personally known anyone to do anything like this. And even though it was only three years ago, there were fewer online resources.

Michael had backpacked through Australia for a couple of years in his 20s, but this was all new to Brent. And he wasn’t — and still isn’t — a particularly adventurous person. Neither of us likes taking huge risks.

But somehow it still felt right.

Then one day while we were still making our preparations, we saw an article in the New York Times about something called “digital nomads.”

“Hey!” Michael said to Brent. “I think this might be what we’re planning to do.”

Finally, we had a term — “digital nomad” — to describe our future lifestyle.

We left Seattle at the end of 2017. We spent the winter in a “cohousing” community in Miami, Florida, designed specifically for digital nomads.

And we loved it. We loved the newfound simplicity and intentionality of our lives: we had to carry everything we owned with us, so in order to buy something new, we literally had to get rid of something old.

After three months, we left Miami for Europe, spending seven weeks in the island country of Malta (in the Mediterranean). Then we moved on to Matera in southern Italy, and Bansko, Bulgaria, in Eastern Europe for the rest of the year. In 2019, we headed to Asia, in particular Koh Lanta, Thailand, and Hoi An, Vietnam. Then it was back to Europe, to a village in the Swiss Alps for a month. And now we’re in Tbilisi, Georgia, for the fall.

Along the way, we’ve made shorter stops in cities like Lisbon, Barcelona, Geneva, Bologna, Rome, Athens, Istanbul, Florence, and literally dozens of other places.

We had lots of crazy adventures along the way. Some were scary, like the time our apartment in Bulgaria caught on fire. Or when our plane across the Atlantic caught on fire and had to make an emergency landing in Boston. (At this point, we’re not a big fan of fire.)

Of course, most of our adventures were much less frightening: midnight gondola rides in Malta, hiking the impossibly steep Swiss Alps, or bike-riding through the rice fields of Vietnam. (Here we did run into a few disturbingly large water buffalo, but at least they weren’t on fire!)

We were pleasantly surprised — even downright shocked — by how much cheaper it was to live as a digital nomad, especially if you spend significant time in less expensive countries.

More than anything, we’ve met so many wonderful people: smart, funny, passionate, quirky digital nomads from all over the world, and the locals generous enough to invite us into their lives.

Digital nomading is a phenomenon that’s exploding in popularity right now. It’s driven partly by changes in technology: the world is more connected than it’s ever been. And more and more businesses, and business opportunities, can be done remotely.

We’ve met fellow LGBTQ digital nomads too: other same-sex couples traveling the world together, or meeting (and dating) while on the road. That will definitely be the subject of a future column.

We’ve also met local LGBTQ men and women. It’s sometimes upsetting learning how different countries treat sexual minorities, and we’ve definitely had an education on just how shockingly privileged Americans are — and we’ll be writing about that too.

To our surprise, instead of being lonely, we’re more socially active now than we’ve ever been in our lives. The life of a digital nomad means you’re constantly saying hello, and also constantly saying goodbye. But after two years of doing this, we’ve also discovered that you can say hello again, by meeting up with old friends in new countries all over the world. This may be our single favorite thing about this lifestyle.

In short, our lives of anxiety and routine in the United States have become lives of excitement and adventure.

We’ve also discovered the world is full of incredibly handsome men, but I guess that’s a whole other story.

Our careers as writers have continued their ups and downs. In 2019, one of Brent’s screenplays, Project Pay Day, was produced as a feature film (and since we have no permanent home, we were able to travel to Pennsylvania for most of the shoot). But there’s been plenty of new rejection as well.

Funny thing, though. Our lives have become so rich and wonderful that those rejections don’t get us nearly as down as before. We’ve got too many other things to focus on.

The reality is that life on the road is far less stressful than our lives in Seattle. It’s not even close.

A month after leaving Seattle, we looked at each other and said, “Leaving home may have been the smartest thing we’ve ever done.”

Our opinion of being a digital nomad has only kept rising since then. We’ve never been happier or more satisfied with our lives.

In Brent and Michael Are Going Places, we’re telling the full story of our travels — warts and all. (But honestly, there aren’t that many warts. We’re not trying to be aspirational, but that’s how it’s ending up!)

Some people tell us they’re considering a digital nomad lifestyle themselves. As a result, we like to share practical information about the nuts and bolts of our newfound lives, focusing especially on being gay male travelers.

Other people say they simply enjoy living our travels vicariously. Either way, we hope you’ll follow along in our new column.

This is the debut of a new column by Brent Hartinger and Michael Jensen, a gay “digital nomad” couple — two men who travel the world continuously, living in different countries for anywhere from one to three months at a time. Brent is the author of the gay teen classic “Geography Club,” which was adapted as a feature film, and Michael is the former editor of AfterElton.com. Visit them at BrentAndMichaelAreGoingPlaces.com, or on Instagram, Facebook, Twitter.