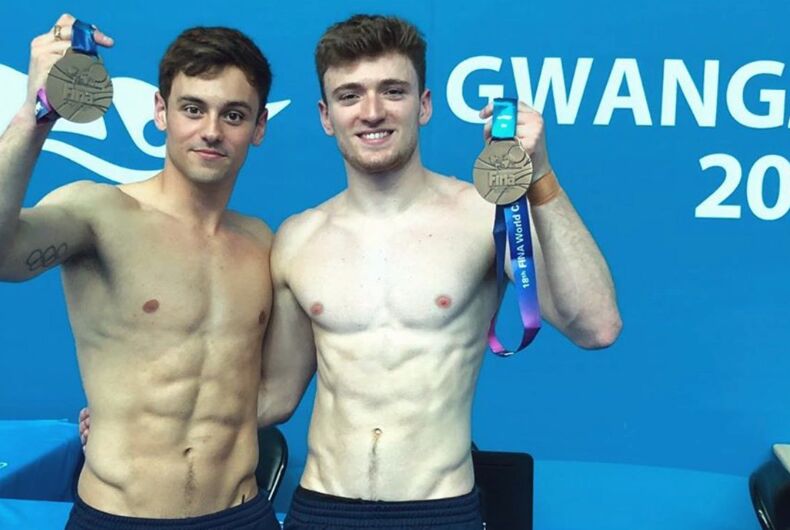 British diver Tom Delay — who came out via YouTube in 2013 — has qualified with his new doubles partner, Matty Lee, for the 2020 Olympic Games in Tokyo after taking home the bronze medal from the World Championships in South Korea.

“WE DID IT! WORLD CHAMPS MEDAL AND OLYMPIC QUALIFICATION FOR GB,” declared Daley in an all-caps message on his Instagram account.

WE DID IT! 😅 WORLD CHAMPS MEDAL AND OLYMPIC QUALIFICATION FOR GB 🇬🇧 @mattydiver

Daley teamed up with Lee at the end of 2018 in the men’s synchronized 10-meters platform.

A winner of the 2012 Olympic bronze medal in the 10-meter platform, Daley has a long history as a diver. This will be his fourth trip to the Olympics on behalf of Great Britain. He previously competed at Beijing 2008, London 2012 and Rio 2016.

Daley had initially said in 2013 that while he was in a relationship with another man, “of course I still fancy girls.” His feelings have since evolved. He wed screenwriter and film producer Dustin Lance Black in 2017. The pair had a child via surrogacy in 2018.

Lee has not been to the Olympics, but has won the gold medal in 10-meter platform at the 2015 European Games as well as the mixed 10-meter synchronized platform at the 2017 European Diving Championships. Lee has also twice been European junior champion on the 3-meter springboard.

Lee hasn’t opened up about his own sexuality, and most sites that discuss his possible love interests only note that he shares a lot of photos with his mother via his personal Instagram site.

What happened to Lindsey Graham?