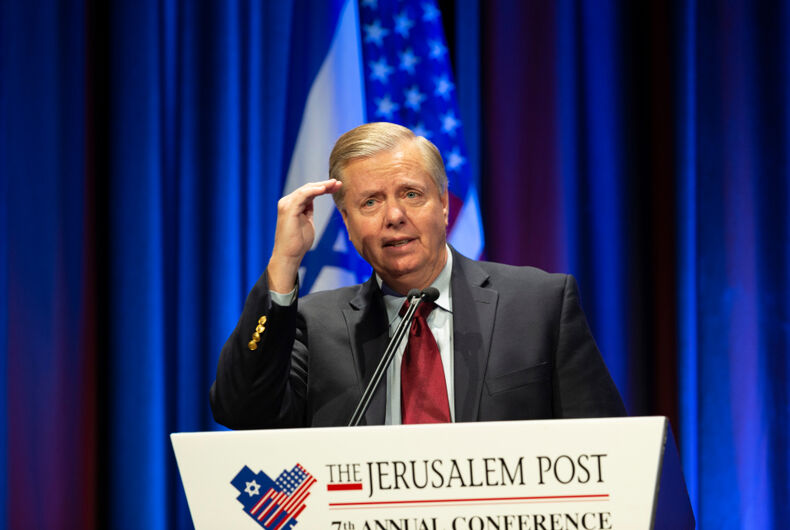 On the “Fox and Friends” morning program, Senator Lindsey Graham (R-SC) defended Donald Trump’s recent toxic tweet that members of “the Squad” — composed of four first-term progressive Democratic Congress women of color – should “go back and help fix the totally broken and crime infested places from which they came.”

And, he added, “You can’t leave fast enough.”

Graham referred to the four women as a “bunch of communists” who are “antisemitic” and hate the United States.

“We all know that [Rep. Alexandria Ocasio-Cortez] and this crowd are a bunch of communists, they hate Israel, they hate our own country, they’re calling the guards along our border—the Border Patrol agents—concentration camp guards,” Graham bellowed. “They accuse people who support Israel as doing it for the benjamins, they are antisemitic, they are anti-America. Don’t get them—aim higher.”

Yes, the newest group of young legislators have suggested a more even and nuanced attempt to solve the seemingly entrenched problems in the Middle East, and in particular, between Palestinians and Israel, but that does not make them “antisemitic.” Because they do not mindlessly accept the actions and policies of Israel’s current right-wing government as does Lindsey Graham, this does not make the women antisemitic.

He will not get away with his blatant attempts to deflect and distract Trump’s clearly racist and xenophobic diatribes and his own direct collusion and enabling. Graham’s clear goal is to divide Jews from the progressive politics of the four strong first-term members of Congress and turn Jews into Trump’s defenders.

Graham is struggling to turn the women and their politics into the issue rather than the President’s and his own lack of moral leadership.

It wasn’t too very long ago, when his friend John McCain was alive, that Graham blasted Trump following Trump’s announced Muslim ban in 2015 during the campaign.

What happened to that Lindsey Graham? Now he has become Trump’s favorite golfing partner and political sycophant.

We have long known that Donald Trump is a liar, a racist, and a white nationalist. Republican leaders and their supporters who don’t speak out are enablers and are themselves conspirators!

“Enabler” is the term given to those who fail to act to help abusers. “Passive bystander” or “bad Samaritan” is the name for people who are conscious of bad actions evident around them but fail to intervene.

Enabling and passively standing by take many forms, including literally offering an addict substances or conspiring with an abuser in a sinister plot, contributing to the denial of addicts and aggressors by asserting that they don’t have a problem, to downplaying the seriousness and making excuses for their behaviors, translating for others what the person “really meant,” downright lying, distracting, deflecting, and so on.

How many times have we heard, “He didn’t mean it that way. What he really meant to say was…” or “You are misunderstanding her,” or “I got this black eye by walking into a door.”

Sarah Huckabee, Trump’s former Minister of Propaganda and Disinformation, frequently verbally attacked members of the press at her few-and-far-between White House press briefing for asking questions that in any way challenged the President’s reasoning or truthfulness.

I often wonder how Trump enablers can sleep at night and get back up in the morning still willing to degrade and prostrate themselves by attacking our democratic institutions and dismantling our country’s standing in the world.

Each time anyone enables an abusive action or actor, they keep perpetrators and themselves further from the truth and from help, and they diminish themselves and their integrity more than just a bit.

These enablers spin the facts by turning themselves into virtual pretzels in defense of Trump’s absurdities, giving him permission to commit other atrocities.