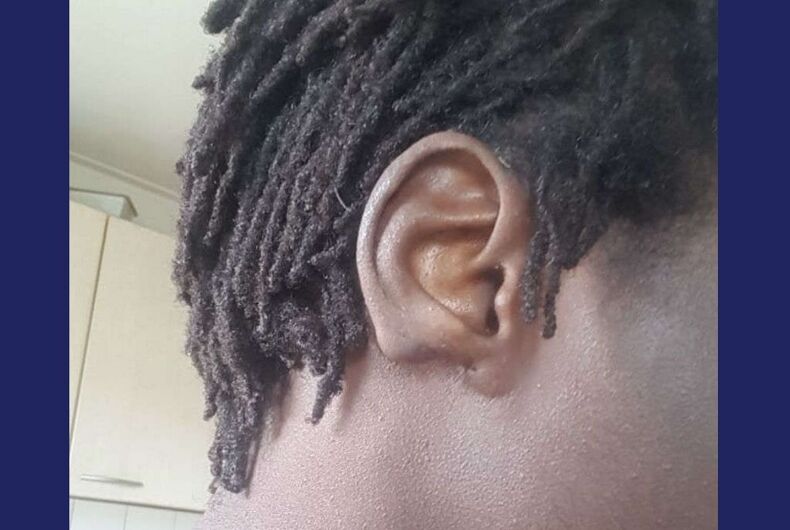 A 19-year-old gay man said that he is scared for his life if he is forced to go back to his home country after his father cut off his earlobe.

The teen, who has only been identified as “Modou” in the media, is from The Gambia and is trying to get asylum in the The Netherlands.

He told Gay Star News that he never planned to come out to his family.

“I was so afraid to tell my family about my sexuality,” he said.

But when he was 15-years-old, he was caught with another boy. The other boy was scared, so he said that Modou assaulted him.

“I couldn’t lie,” Modou said, explaining why he chose to come out to his family then.

“I thought, maybe, my family will accept me because I am their family. This is who I am.”

“That was the biggest mistake I ever made.”

His parents informed the police that he is gay.

Modou’s father locked him in a room and cut off his right earlobe to mark him as an abomination, he said.

“It was the most painful thing in my life,” Modou said.

“The worst thing is they didn’t take me to hospital or give me medication. They just locked me inside a room as I tried to stop the bleeding.”

“I also remember every moment like it was yesterday.”

He was worried that everyone would see his ear in public and know why his father cut off his earlobe.

“I was marked as an abomination,” he said. “I thought I would just stay home – be a recluse. It is not accepted in the Bible or the Quran.”

A few months later, he managed to get to Leiden, Netherlands, where his uncle lives. He said that his uncle is Muslim and he hasn’t come out to him because he knows he would be rejected.

“I just want to finish school and live a free life,” Modou said.

Even though he has been in The Netherlands for three years, he says that he is “terrified” that his request for asylum will be rejected.

In The Gambia, homosexuality is illegal and punishable with up to 14 years in prison. But even that understates how dire the situation is for LGBTQ people in The Gambia.

In 2008, former President Yahya Jammeh vowed to “cut off the head” of any gay person in the country and said that the nation would pass laws on homosexuality “stricter than those in Iran.”

A 2011 report from the U.S. State Department found “strong societal discrimination against LGBT individuals” in The Gambia and also said that there are no LGBTQ organizations in the country.

“I will also not be surprised if part of his ear cut off by his family because he is gay. There is a lot of hostility against the LGBTI community in The Gambia.”

He was beaten after being called anti-gay slurs. Now his picture is going viral.