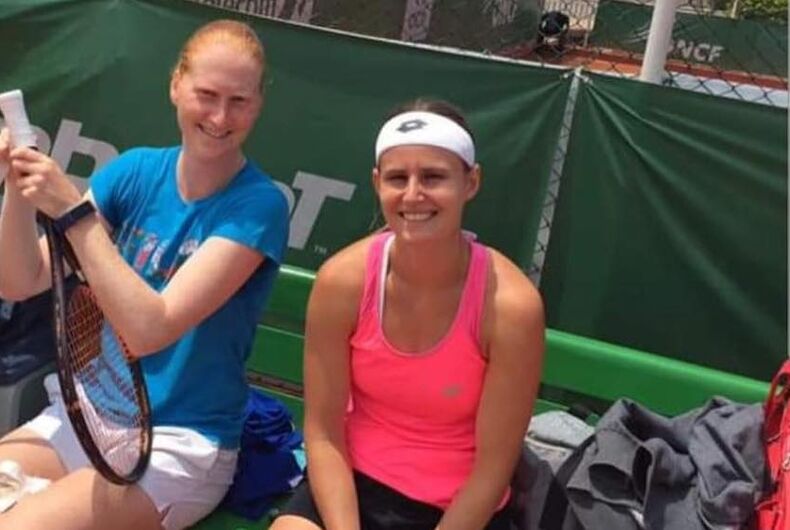 This year’s Wimbledon tennis championship tournament had a bright gay spot with Belgian tennis players Alison van Uytvanck and Greet Minnen making history as the first ever out lesbian couple playing together  as doubles partners.

We actually highlighted the couple last year when Uytvanck kissed Minnen in the stands after winning her Wimbledon match. But this year, Minnen isn’t just supporting her girlfriend from the sidelines — she’s playing alongside her on the court.

They’ve effectively made history as the first ever out same-sex couple to play doubles at Wimbledon together, according to Outsports.com.

Uytvanck, 25, came out in a 2018 TV interview after she won the Hungarian Ladies Open in Budapest. At the time she said that she was in a relationship with Minnen, a professional tennis player and that she needed to come out because she had no reason not to.

“I’m not sick. I don’t have a disease,” she said at a press conference.

The couple then made a splash at Wimbledon 2018 when the BBC aired their post-match kiss.

Couple goals 😍 playing for the first time together in a grandslam! Enjoyed every second of it! ❤️ you @greetjeminnen

At this year’s Wimbledon, Van Uytvanck and Minnen defeated their U.K.-based opponents Katie Swann and Freya Christie in their first round of play. However, the couple then lost to Taiwan doubles team Chan Hao-ching and Latisha Chan, effectively ending their play together at this year’s tournament.

In an interview with The Guardian, Van Uytvanck said:

“We [would like to] see more people coming forward and saying ‘It’s OK.’ I think people would have more confidence. That would be something good, men would appreciate that. More people would come out – it would help to make it easier.”

“Women are coming out more easily than men. I hope we are something that people can look up to, like a role model to come out. There must be some gay men [actively playing] out there. For me personally, [if I were] a man, it would be more difficult to come out.”

The Guardian says the only known gay male player at Wimbledon since World War II has been Brian Vahaly who came out in 2017, a decade after retiring.

This daycare rejected a child because her parents are lesbians

Can a gay millenial of color beat a homophobic minister for a NY Congressional seat?