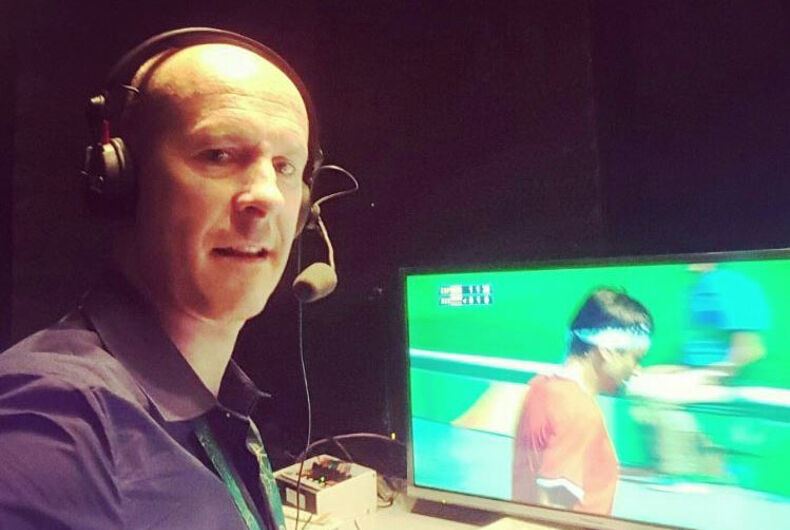 Even though the kisscam is at long last no longer a sports arena fixture for straight couples only, an announcer for the BBC is in hot water for stating that the absolute worst thing that NBC’s cameras in Rio could show viewers back home would be “two blokes” smooching.

The BBC apologized for the homophobic remark by Olympics tennis commentator Paul Hand, as PinkNews and Gay Star News reported. Although the London-based network has no control over what NBC’s cameras show, the executives do have control over Hand, who declared as the cameras panned the crowd in Rio de Janeiro, Brazil: “Let’s hope they don’t go on to two blokes sat next to each other.”

Hand has been a broadcaster for some time now. He traded his tennis racket for a microphone and headphones after reaching the finals at Wimbledon in 1994.

And this remark scored no “love” from tennis fans on Twitter.

@BBCSport can you inform Paul Hand that if a camera purposely looks for couples it may encounter 2 men, and that's ok #EverydayHomophobia

@BBCSport
Paul Hand must NOT be allowed to get away with this. It's 2016 and you are broadcasting to MILLIONS. https://t.co/vypbOUCEoo

@BBCRedButton could the idiot commentator, please cease making homophobic comments about the kisscam at the Konta match

Wow!! @BBCSport I think someone needs a word with Paul Hand. Why shouldn't the camera have picked out two guys?!?! https://t.co/93k1Zgrx2G

Of course not everyone thought Hand was being homophobic… just stupid.

Am I the only one who DOESN'T think this guy's homophobic? He's just a bit of a plonker no? https://t.co/kNHNL7kJ6i https://t.co/8uxQJ6tdEC

Painful mishap costs paralympian her chance for glory in Rio