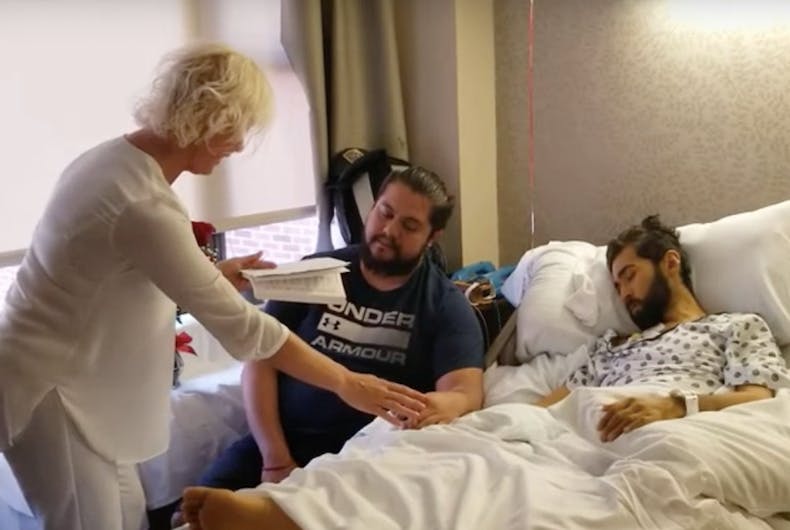 Erwin Sigueroa hold Alfredo Garcia III's hand as the two marry in a commitment ceremony at a Chicago hospicePhoto: YouTube

When Alfredo Garcia III checked into Chicago’s Seasons Hospice MacNeal Inpatient Center on July 18, he was dying of stage IV liver cancer and had Hodgkin’s lymphoma spreading through his lymphatic system.

Bryan Pottow, director of the hospice, asked Garcia his dying wishes. He wished to marry his boyfriend of five years and “the love of his life,” Erwin Sigueroa. The two had been lifelong friends growing up together in the Little Village neighborhood.

So Pottow helped organize the wedding.

Although the trio originally wanted to arrange a courthouse official to make it legally binding, Garcia’s condition worsened significantly over a 48-hour period, so they decided to just hold a non-governmental commitment ceremony, according to the hospice’s spokesperson, April Dovorany.

The ceremony lasted about half-an-hour with 12 people attending, including Pottow and Garcia’s sister and brother. After the ceremony, they had a champagne toast.

Related: Support this documentary about a gay “saint” who helped poor, HIV-positive people die with dignity

“Our Seasons Hospice team surrounded Alfredo and Erwin with love, with our chaplain performing a wedding ceremony as our music therapist played their favorite tunes. We had champagne, catered in the couples’ favorite food and had the best wedding we could for this couple,” Dovorany told LGBTQ Nation. “It was a time of joy during a very difficult time in this couple’s life.”

The two hold hands as Sigueroa delivers his partner’s vows. He says, “I Freddy take you Erwin as my partner in life and my one true love. I will cherish our friendship. I will love you today, tomorrow and forever.”

Sigueroa then repeated the vows for himself.

After the ceremony, someone held a cup of champagne to Sigueroa’s lips so he could taste the joy of their loving union.

Correction: The initial version of this story had the couple’s names switched.