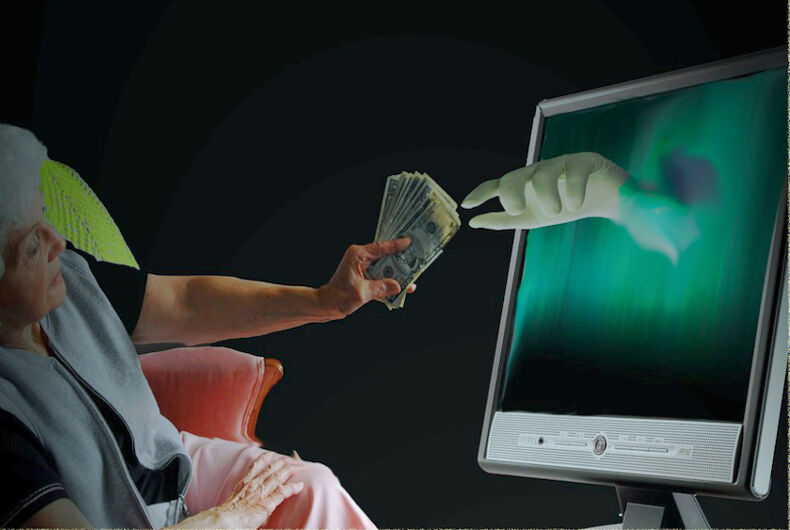 The right-wing is home to a phenomenal number of scuzzy money-raising rackets. Disgraced (but not gone) televangelist Jim Bakker is selling Silver Solution gel, which promises to “get rid of all venereal diseases.” Milo Yiannopoulos was hawking “milk thistle extract” as a kidney “cleanser.” Pat Robertson has extolled the wonders of his age-defying protein drink. Then there are the endless pitches for gold.

But perhaps the biggest grifting goes to “scam PACs,” political action committees that raise millions of dollars from small donors, mainly senior citizens, and spend the money on themselves and not political work.

A recent joint investigation by Politico and ProPublica highlighted how one outfit, Conservative Majority Fund, raised $10 million since 2012 and spent all of $48,400 on political contributions.

According to the investigation, the “main beneficiaries are the operative Kelley Rogers, who has a history of disputes over allegedly unethical fundraising, and one of the largest conservative fundraising companies, InfoCision Management Corp., which charged millions of dollars in fundraising fees.”

How do they do it? They came up with most outlandish conspiracy theories that you can concoct. The U.N. is going to tax U.S. citizens. There’s a drive to remove Obama from the ballot. The PAC is supporting an army of people to appear on television to promote conservative causes.

None of which were true. Even Rogers seem to know how awful the marketing pitches were. “This makes me a little queasy … which is good,” Rogers wrote after reviewing one script.

Scam PACs have been around for a while. In 2013, a scam PAC raised $23 million purportedly to promote the gubernatorial campaign of anti-LGBTQ Ken Cuccinelli, then Virginia’s attorney general. Cuccinelli never saw a dime of it. Ditto for scam PACs that raised $14 million to help the re-election campaign of then-Rep. Allen West, another right-wing stalwart. West lost his bid by less than one percentage point.

The scam PACs are perhaps the inevitable outcome of a conservative bubble that is unmoored from reality. Listen to Fox News long enough, and you might be susceptible to all kind of unhinged theories.

And that’s the relatively restrained version. The right has become the home for all kinds of bizarre conspiracy beliefs, from Pizzagate to QAnon to virtually anything Alex Jones says.

Not only are such demonstrably nutty ideas tolerated, they’re embraced. At its recent social media summit, the White House invited a whole bunch of conspiracy promoters, thus giving them credibilty and prestige.

The Federal Election Commission is virtually powerless to stop the PAC grifting machines. Moreover, given his administration’s track record, Trump isn’t about to tackle a problem for which he may be the prime business model.

So the scam PACs (and the television snake oil salesman) will keep up taking money from gullible senior citizens. But there is a silver lining. All that money going to line the pockets of the sleazy political operatives isn’t being spent where it might do some actual harm: on the campaigns themselves. Otherwise, we may be talking about Gov. Cuccinelli and Rep. West.