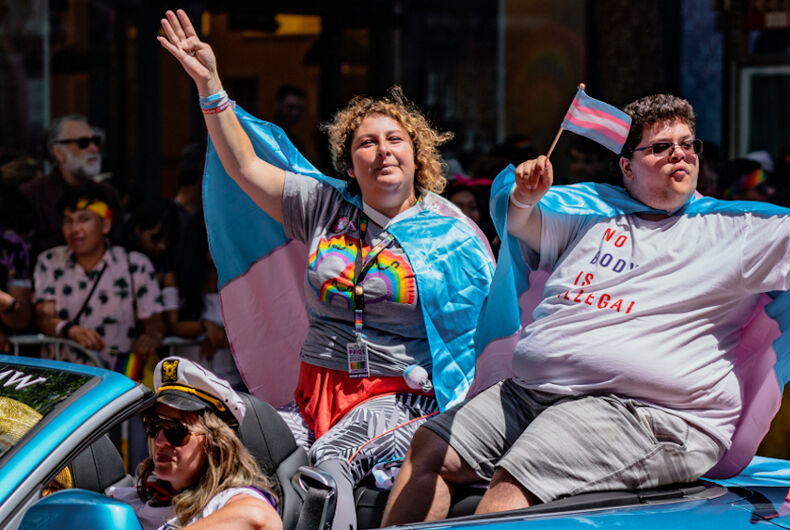 Gavin Grimm, the trans male student from Virginia who fought his school board’s transphobic bathroom policy in 2017, has been given a generous scholarship from an ally best known for opening a rainbow-colored house across the street from Kansas’ Westboro Baptist Church (WBC).

Aaron Jackson is Grimm’s benefactor. Jackson is the founder of Planting Peace, a humanitarian and environmental international non-profit organization. In a public Facebook post, Jackson wrote:

Last week, I put out a request asking if anyone knew a queer or trans kid that could not finish school due to finances. I received a lot of great requests. It is heartbreaking we make it such a struggle for our nation’s kids to finish school! Well, I couldn’t have found a more amazing kid to support.

This young man simply needed to use the bathroom in peace. And he took his fight all the way to the nation’s top courts when they told him what bathroom he had to use. I followed his story from the beginning. There are change makers and then there is this kid.

I tell anyone I put in a school that I have one requirement… I get an invite to see them walk. Not only did he say that was okay, but he also said he would let me know when he was in his first classroom as an English teacher. I guess he will send me a selfie or something.

Related: School board that took trans bathroom case to Supreme Court may change their policy

Grimm’s mom, Deidre Smith Grimm, says that her son was crying when he called her with the news of Jackson’s scholarship. Deidre then texted Jackson to offer him a seat next to her at Gavin’s graduation. In response, Jackson began crying himself, and texted her:

Your child has done so much for the LGBT community… It is a real honor to help your baby boy. I feel like I just gave a scholarship to the Rosa Parks of the trans bathroom debate lol. Your child is a hero to many. Myself included. And I look forward to sitting next to you at his graduation. Can’t wait.

In 2017, Grimm was honored by Time magazine as one of the 100 most influential people in America, by GLAAD at its annual media awards and by the U.S. Department of Justice with its Gerald B. Roemer Community Service Award.

Grimm’s case against his school district was set to be heard by the U.S. Supreme Court in March 2017, but the court sent the case back to the district court following Trump’s change on an Obama-era guidance on Title IX allowing trans students to use bathrooms matching their gender identity.

As for Jackson, he’s better known for opening a rainbow-colored Equality House next door to the rabidly anti-LGBTQ WBC. In June 2015, the Equality House hosted an on-the-lawn gay wedding between Gandalf the Grey and Dumbledore, two wizards from the Lord of the Rings and Harry Potter book series, respectively.