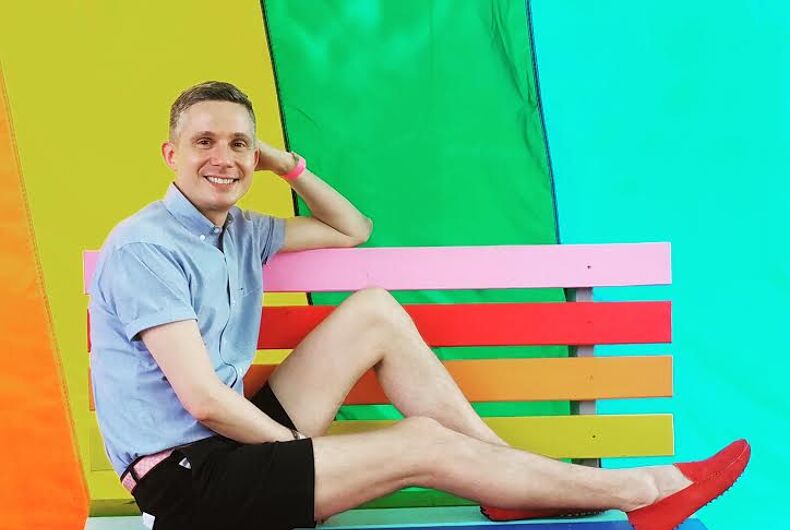 Matthew Ossenfort has spent his young career designing Macy’s menswear, including pieces for Alfani and Bar III. This season, his stylings are particularly personal. He’s created several special pieces for Macy’s Pride Collection to benefit The Trevor Project, a non-profit focused on crisis intervention and suicide prevention for LGBTQ youth.

Through June 30, 2019, Macy’s will donate $2 of the purchase price of these t-shirts and socks to Trevor. And if you round up your in-store purchases through June 17, the extra change will go to Trevor Project.

Ossenfort was born and raised in New York and currently resides in Norwalk, Conn., with his husband of nine years, Jeffrey Denke. He’s a vegetarian, a yoga enthusiast, and a collector of Victorian antiques. This year he will be marching at World Pride with his fellow Macy’s employees and wearing his own pride styled socks.

LGBTQ Nation caught up with Ossenfort ahead of the Pride Collection launch to talk about the partnership between Macy’s and The Trevor Project, his design work, and the mission to end teen suicide.

How old were you when you came out? What was the experience like?

The school I attended had a significant focus on theatre, art, and dance and I found myself, sort of accidentally, thrust into a population with a large concentration of LGBTQ people. I immediately felt a connection and for the first time in my life felt like I was part of a community.

I had admitted to myself two years prior that I was gay, but I was fearful of the potential reaction from my family and friends. Suddenly finding myself surrounded by so many people who were confidently living their truth inspired me to do the same. These new friends also provided a support system so I could be better prepared to face any negative reactions that I might experience.

I slowly started coming out to my family and friends over the next few months and I was blown away by the love and support I was met with. I also got the sense that it wasn’t much of a surprise to most.

And what would you tell others embarking on the same experience?

I understand that I am very lucky and that there are so many people out there who are less so. The world has changed so much since then and the community has a lot more visibility than it did back then. I think some of the challenging aspects of coming out remain true even today.

To those at the very beginning of their coming out process, I would say this: You are not alone, even if it feels like you are. Find other like-minded people and create your own new network of love and support. They will be there for you to celebrate the positive reactions that you receive and help you through any negative ones.

This above all else: there is nothing wrong with you, and if anyone tries to convince you that there is, then perhaps that person doesn’t belong in your life. You owe it to yourself to be honest and you will be happier knowing that the people in your life love the real you and not someone you are pretending to be.

What was your first exposure to The Trevor Project?

I became very active in fundraising in 2004 when I first joined Macy’s. Giving back has always been an important part of the culture at Macy’s and I was immediately inspired.

My initial focus was on AIDS research and prevention. Having seen how HIV/AIDS decimated the gay community while I was growing up, I felt that was a good place to start. In 2010, there were a lot of high-profile news stories about suicide among LGBTQ kids due to bullying. I started researching organizations that were actively helping and that led me to The Trevor Project.

I fell in love with the idea of helping young people who were at risk. The coming out process can be so scary and I understand how easy it can be to find yourself in crisis and considering how to escape it. I began working on fundraisers that would benefit The Trevor Project while I continued to raise money for AIDS-related causes.

Some have asked why we still have a need for organizations like The Trevor Project in an era of such visibility. What are your thoughts about increased visibility versus increased backlash?

Unfortunately, as our visibility increases so does the potential for backlash. Young people, in particular, can be very susceptible to the negative messaging from those who make it clear that they would prefer it if we didn’t exist. I truly believe that increased visibility is the path to a greater acceptance of our community, but sadly, it seems that will not come about without casualties. It is our responsibility to do our best to reach these at-risk young people to help them understand their worth before someone else convinces them otherwise.

Who were your heroes growing up?

I have so many answers to this! When I was coming of age in the mid-’90s there was this emergence of queer icons that showed me that the world could be changed, but we would have to be very brave.

Ellen [DeGeneres] for having the guts to come out on national television knowing that there was a strong chance it could end her career, but also knowing how much it could impact our culture and make the world better.

RuPaul for fearlessly showing the world the revolutionary idea of a 7-foot drag queen of color preaching the value of self-love.

Norman Korpi from the first season of MTV’s The Real World. His presence on The Real World might have been my first glimpse of a real gay man who wasn’t playing a character, living authentically. He was so kind and likable and he helped me be a lot less afraid of what my life would be if I came out.

Pedro Zamora from the third season of The Real World, for helping audiences better understand the AIDS virus, providing education on safer sex, and reducing the stigma surrounding the disease by managing through it with grace and dignity while in the public eye.

Will & Grace because there is so much power in making people laugh while teaching them about things they don’t understand. I believe that these characters, along with Jack and Karen, gave America some insight into what it means to be LGBTQ—that we are just like everybody else, except perhaps we’re a little funnier.

I feel like we have made so much progress, but I would love the next 50 years of Pride to be a celebration of intersectionality and progress for the trans and non-binary community.

I don’t think my wildest imagination could capture what Pride is going to look like at 100. When I was young I didn’t think I would ever be able to get married to someone of the same sex and now it is A NATIONAL LAW. I thought “coming out” would always be a thing and now there are young people teaching us the importance of asking for one’s preferred pronouns.

The world is always changing and evolving and I am thrilled by the momentum our movement has achieved. There is still a good deal of work to be done. I imagine that there always will be, but to think about how far we have come in 50 years in terms of accomplishments, acceptance, and media representation is inspiring. 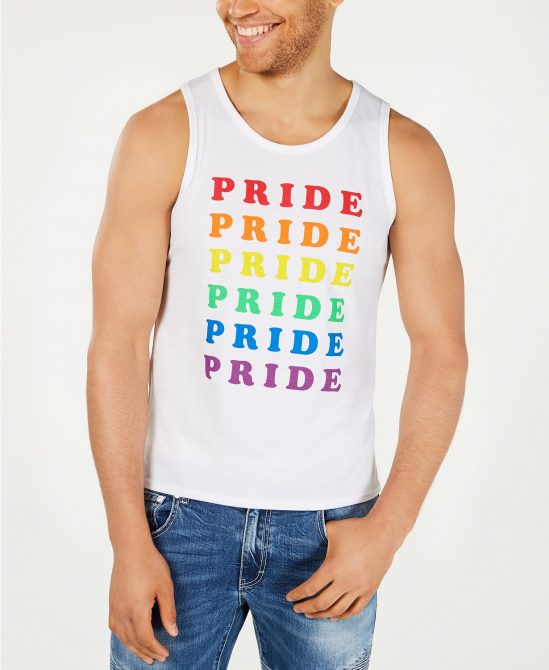 You designed the special products for Macy’s that will celebrate Pride and benefit The Trevor Project. What was your inspiration?

The inspiration here was really about capturing the simple but powerful message that is expressed by the word Pride while highlighting that importance of the rainbow and what it means to our diverse community.

When you have moments of fear—and it happens to all of us—what do you do? Where do you turn?

I always try to be as fearless as possible, but when I find myself afraid I do my best to channel that fear into motivation. I will admit that I can’t always get myself there immediately and for those moments I turn to my amazing husband, Jeffrey, who has helped me through my most difficult times, as well as to my mother, my brother, and my wonderful circle of friends.

What’s the biggest satisfaction you’ve gained from the partnership between Macy’s and The Trevor Project?

The biggest satisfaction I’ve gained is the knowledge that I have had the opportunity to play a small part in creating a relationship that will save countless lives. The Trevor Project does such amazing work. Leveraging the magic of Macy’s to amplify their message will help them to reach an even wider audience.

What will be your own outfit at Pride 50? Where will you be celebrating?

I am marching with Macy’s so I will be wearing the Macy’s “Pride and Joy” t-shirt with shorts, the Macy’s INC socks from the collection benefitting the Trevor Project—and comfortable shoes!

My plan for after the march is still coming together, but I always try to make a point of finding somewhere to dance. The first Pride march was a protest and I think it is very important to keep sight of that. We are still fighting for better treatment and equal opportunities throughout the country, but I think we are definitely at the point where the protest pairs beautifully with celebration, and dancing is an important part of that.

Through June 30, 2019, Macy’s will donate $2 of the purchase price of these t-shirts and socks to The Trevor Project. And if you round up your in-store purchases through June 17, the extra change with go to Trevor.