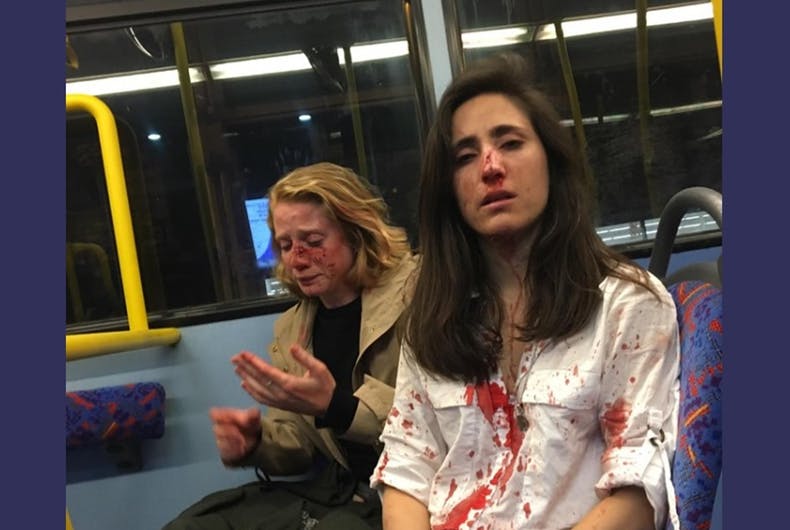 London police have arrested five teens in connection to a shocking lesbian bashing on a city bus when a couple refused to kiss for their entertainment. The women posted a selfie after the attack: their faces and clothes covered in blood. Now they’re speaking out.

In an interview with CBS Weekend News, Melania Geymonat and her partner Chris (last name not given) had visible bruises.

Chris said, “They got up out of their seats and walked over to where we were, and started very aggressively harassing us. Fighting broke out and they took my phone, her phone, her bag and they ran off the bus.”

In the now viral Facebook post about their attack, Geymonat wrote, “They started behaving like hooligans, demanding that we kissed so they could enjoy watching, calling us ‘lesbians’ and describing sexual positions. I don’t remember the whole episode, but the word ‘scissors’ stuck in my mind.”

Geymonat said she started making jokes, hoping to break the tension and to get the men to leave, but they didn’t. Instead, they started throwing coins at the women.

“The next thing I know is that Chris is in the middle of the bus fighting with them,” Geynomat wrote. “On an impulse, I went over there only to find her face bleeding and three of them beating her up.”

The men started punching her, and she may have lost consciousness. Before she realized what happened, police were on the bus and she was bleeding.

The teen arrestees are between the ages of 15 and 18.

Chris told CBS Weekend News, “I want people to feel emboldened to stand up to the same people who feel emboldened by the right-wing populism that is I feel responsible for the escalation of hate crimes.”

Here is their interview with CBS Weekend News: