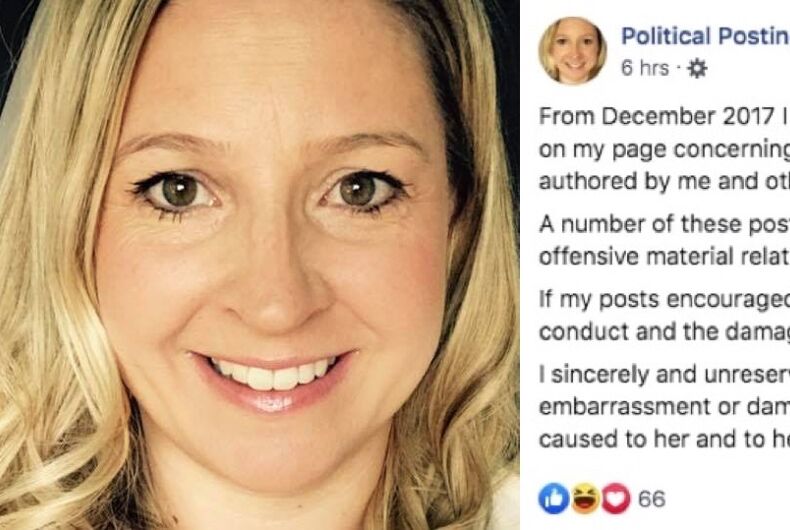 Marijke Rancie, known in Australia as “Political Posting Mumma,” was one of the most vociferous antigay activists fighting the country’s legalization of same-sex marriages. On her Facebook page she regularly posts anti-trans content and claims that LGBTQ people want to sexualize children and take over society.

But after she was sued for defamation by Adele Moleta, known online as “Delsi Cat,” for insinuating Moleta was a pedophile, Rancie issued a “sincere” apology on Facebook – and then posted more anti-LGBTQ content within hours.

Rancie had previously posted on social media that Moleta, a former school teacher “is a sick and twisted person who organizes events for high school aged children at which she engages in and condones sexually suggestive conduct while nude or semi-nude.”

Moleta sued for defamation and despite posting a video online where she declared “I’m not backing down,” Rancie did, indeed, back down after court-ordered mediation.

“If my posts encouraged others to attack Ms Moleta, I regret this conduct and the damage caused,” Rancie wrote on a post pinned to the top of her Facebook feed. “I sincerely and unreservedly apologise to Ms Moleta for any hurt, embarrassment or damage which the posts and comments have caused to her and to her personal and professional reputations.”

In her defiant video posted before the apology, Rancie had emphasized, “I won’t be bullied into silence, that’s exactly what the activists want.” And she’s set out to prove herself right since posting the admission that her posts are lies and hate speech.

Within hours of posting the apology, Rancie was pushing a video that attacks the country’s Safe Schools initiative as an explicit “graphic” instruction course on gay sex and all the other normal religious right boogeymen. Moleta was the Safe Schools advisor while she was a teacher.

Of the seven posts Rancie has made since she was forced to apologize, five have been anti-LGBTQ in nature. One was political. The other was a photo of the anti-marriage equality campaigner’s family, unironically captioned “FAMILY LIFE IS THE BEST LIFE.”

Are you more likely to be gay if you’re left handed?

Is the Pulse nightclub about to become a federal memorial?