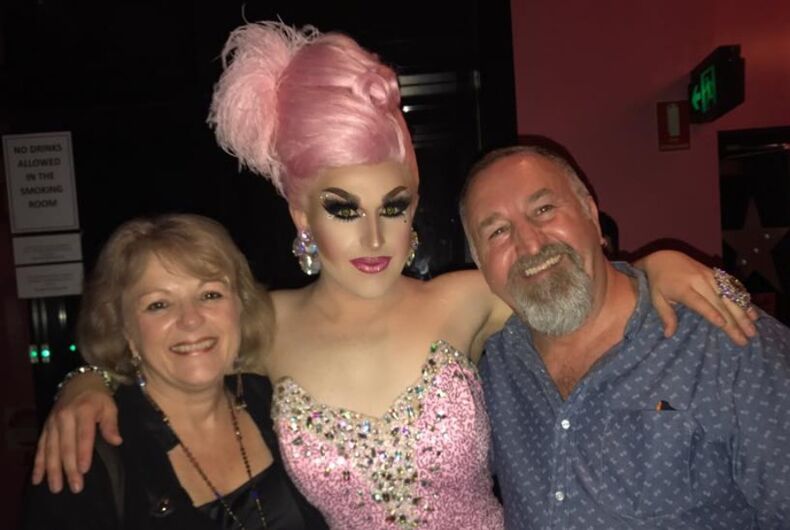 When a “mommy blogger” attacked a drag queen, the queen’s dad wrote the best response.

In a post last week, Rancie linked a story about “Drag Story Time” in Sydney, Australia, an event facilitated by drag queen Hannah Conda in which drag queens read children’s books at events held by an organization for LGBT parents.

“Having a bold, colorful drag princess for kids to talk to opens their minds up to all the possibilities of the world, allows them to ask questions and be curious,” Hannah said.

Well, that’s not how Rancie saw it, who said on her Facebook page that she was “shocked” that parents would allow drag queens anywhere near their kids.

“Don’t forget to bring a piece of fruit,” Rancie wrote.

Collins tried to post a response on Political Posting Mumma, but she deleted it. So Equal Marriage Rights Australia posted it.

Calling her a “piece of work” for deleting his response, he called her comments “appalling, horrible, misinformed, abusive and above all, incredibly hurtful and ignorant.”

He said that “as a proud father,” he is “completely disgusted” by Rancie and her followers.

Collins also cited Rancie’s description of how motherhood affected her politics in which she says, “When one becomes a Mother you are no longer the center of your own universe.”

“If you really want to make a difference in the world we live in, start by being a nice person!” Collins wrote.

The full text of his response is below.

I have just spent some time reading through this wall of appalling, horrible, misinformed, abusive and above all, incredibly hurtful and ignorant commentary. A commentary that is fuelled by, what can only be seen as a poor attempt to promote hatred disguised as ‘Conservative views’. It is an incredibly sad state when so many can only find courage from behind their keyboards to make vile and disgusting statements about an individual they don’t even know and a program they are not even aware of. I find it even more disgusting that the owner of this page, someone who professes and promotes Christian and family values do not act as such, opting to incite nasty and inflammatory diatribe to continue on at the expense of a group or individual. The owner of this Facebook page seems, hell-bent on attacking any and everyone who has a different view or lifestyle than her, this type of bullying and that’s all it is, reaches a new level of lowliness, shame on you.

I do get that you want to protect your children and at all costs. Well, so do I and I believe all parents should strive for nothing less. But madam, as the father of three beautiful adult children including the one you are now allowing to be ridiculed on your wall because you have a dislike for a particular section of our community. I find this completely unacceptable, demeaning and hateful. As a proud father, I am completely disgusted with you and your followers.

The Rainbow Kids program is a program run by the LGBTIQ community for kids of that community, held in their own community. It is not a sick or perverted platform to groom children for pedophiles, I’ll leave that to the religious and other mainstream institutions you and your nasty supporters continue to frequent and hold in high esteem.

My son is Hannah Conda, a drag queen and a very good one at that, he is one of Sydney’s top entertainers. He is a beautiful human being who has dedicated much of his life to his craft, his family and above all his community. He works hard, yes works hard as an entertainer, he pays tax, doesn’t take drugs, doesn’t break the law. He comes from a wonderful and supportive family who have nothing but love, pride, and admiration for him and his chosen path.

I too will do whatever it takes Political Posting Mumma to protect my children, but my job as a parent is to give them a good grounding in their life and to be supportive of their endeavors, to lead by example, guide them to be becoming good citizens in our wider community. So may God help any one of your children if they grow up to have a different slant or lifestyle as you. I have seen first hand and way too often, the terrible sadness that exists with young people who are not accepted by their own families because they are merely gay. Be a great role model to your children, demonstrate love, understanding, and tolerance, not bitterness, hatred, and disdain, remember they will emulate you as they get older.

So before you cast that proverbial stone Political Posting Mumma, make sure that you and your misinformed hating followers are free from sin and live by the only true mantra of Christianity, “Do unto others as you would have done to you”. Rather than promoting hatred through your incessant grandstanding and an unrealistic Ideology of the completely conservative world, understand we are all different and we all need to get along irrespective of our views, sexuality, religion etc.

Political Posting Mumma, I read this on your Facebook page, perhaps you could take a leaf from your own book.

“A profound & countercultural idea is found in the fact that when one becomes a Mother you are no longer the centre of your own universe. You relinquish that position to your children. Selfless love rewards us with more than we anticipate, especially if part of that love is committed to reaching the next generation. Be the change you want to see & see it first in your family.”

If you really want to make a difference in the world we live in, start by being a nice person!

Why are gay conservatives so quick to claim persecution?