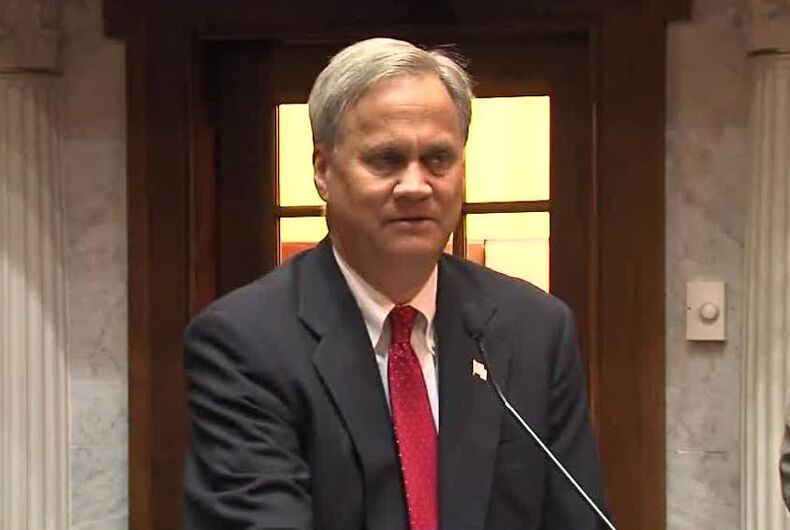 In a statement, Merritt said:

“(Walking in the parade) was meant to show that I respect the feelings and rights of the LGBTQ+ community and desire to engage in dialogue with them and to serve them as our mayor. However, one must also respect another’s wishes. This is Indy Pride’s celebration, and I do not wish to dampen it. Therefore, I will not be marching in the Pride parade on Saturday, because I do respect the rights, feelings and wishes of those who organize and participate in this event.”

After a local blogger reported that Merritt had planned to march in the parade, GLAAD and others highlighted his support as a state senator of a state constitutional amendment to ban same-sex marriage and the “religious freedom” law to allow businesses to refuse to serve LGBTQ people.

While campaigning to become mayor of Indianapolis, Merritt had defended his anti-LGBTQ voting record, saying “I stand by every vote I’ve had in the last 29 years as a state senator.”

Related: Indiana Republican asks Buttigieg “How gay are you?” in a shockingly vulgar diatribe about sex

In his recent statement however, Merritt said he regretted his vote after he “learned how [the religious freedom law] could be used as a sword against members of the LGBTQ+ community.”

He pledged to work with the state legislature and the governor to get hate crimes protections for transgender and non-binary people, and to work on employment and housing protections, as well as actively recruit LGBTQ people to leadership roles within the city, and create a “true diversity department.”

Reactions to Merritt’s statement has been mixed. Chris Paulsen, CEO of Indiana Youth Group, the city’s organization for LGBTQ youth, wrote via Twitter, “Say what you want about @MerrittForMayor. Only time and his actions will tell if he has evolved in his thoughts about LGBTQ people. But know this, he stepped to that microphone today knowing he would lose people in his base. I can’t see a benefit, if he is not sincere.”

Say what you want about @MerrittForMayor. Only time and his actions will tell if he has evolved in his thoughts about LGBTQ people. But know this, he stepped to that microphone today knowing he would lose people in his base. I can’t see a benefit, if he is not sincere.

Other locals wondered whether Merritt’s statement was merely a ploy to peel Democratic votes away from his mayoral competitor.

After speaking with Jim Merritt and his campaign, Indy Pride appreciates his decision to forgo the Indy Pride Parade this weekend. We welcome him to join LGBTQ+ Hoosiers and allies in the fight of equality and nondiscrimination for all. The goals outlined in his statement are objectives our community has fought to accomplish for decades.

Indy Pride’s focus this weekend is a celebration of the history, culture, struggle, and bravery of the LGBTQ+ community.