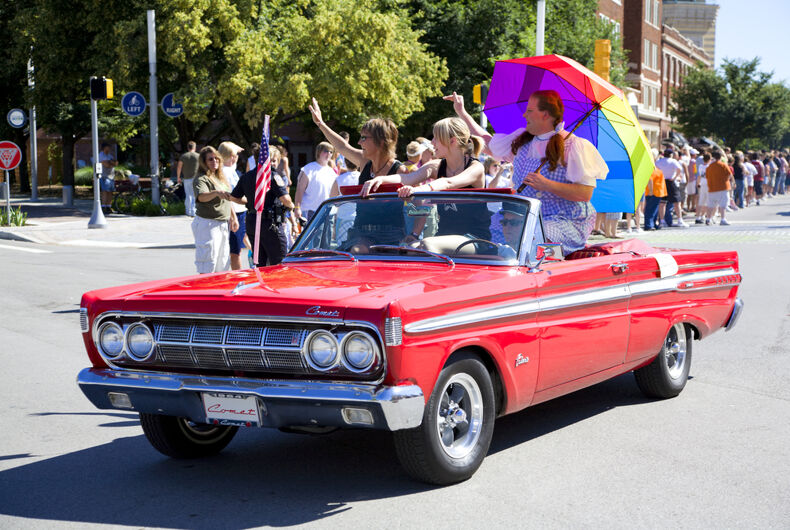 Indy Pride has been thrust into the spotlight after a local blogger reported that Indianapolis Republican mayoral candidate Jim Merritt planned to march in the parade.

Merritt wanted to march with former mayor Greg Ballard, according to IMPORTANTVILLE. While Ballard has been welcomed to the parade based off his pro-LGBTQ history, Merritt did not submit an application for his own float or contingent of supporters.

After the site reported Merritt planned to participate despite his notoriously anti-LGBTQ voting record as a state senator, GLAAD tweeted out a quick condemnation of the politician and asked why he was “scheduled” to march. Organizers did not know he had planned to attend.

The group quickly clarified that Merritt wasn’t welcome as a parade participant. “He is not an ally and not welcome at our events due to his track record,” the group tweeted, after angry locals and outraged activists started bombarding the group’s social media with demands to know why he was allowed to participate.

Organizers quietly grumbled off-the-record that the activist group’s tweet made it sound as if Merritt had their blessing to march in the parade. “How would this make LGBTQ Hoosiers feel that an anti-LGBTQ activist is marching in their parade?,” GLAAD tweeted in the original blast.

“Anti-LGBTQ+ individuals and groups are not welcome at our events,” IndyPride shot back. “We encourage allies of our community to march along side us. He will not be walking in our Parade.”

Anti-LGBTQ+ individuals and groups are not welcome at our events.
We encourage allies of our community to march along side us. He will not be walking in our Parade https://t.co/0H0PYEBDlN

“Indy Pride is a community of LGBTQ+ individuals who gather to celebrate their identities, history, and culture,” IndyPride Executive Director Chris Handberg told the Indianapolis Business Journal. “Sen. Merritt has consistently fought against legislation which would make our community safer and more secure.”

As a state senator, Merritt supported and voted for a constitutional amendment to ban same-sex marriage in Indiana. He voted for the state’s notoriously controversial “religious freedom” law that gave businesses the right to refuse to serve LGBTQ people.

Over the past couple of weeks, Merritt has repeatedly defended his anti-LGBTQ voting record, saying “I stand by every vote I’ve had in the last 29 years as a state senator.”

A second black trans woman was murdered in Dallas