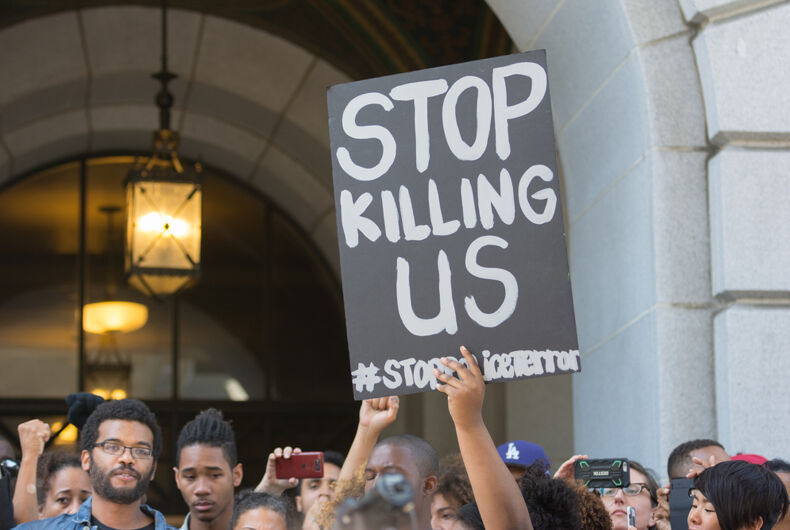 On the cusp of commemoration of the 50th anniversary of the historic Stonewall Inn riots, which many historians cite as a spark for the modern movement for LGBTQ equality, New York police commissioner James P. O’Neill offered a long overdue apology on behalf of the force.

“I think it would be irresponsible to go through World Pride month and not to speak of the events at the Stonewall Inn in June of 1969,” O’Neill said. “I do know what happened should not have happened. The actions taken by the NYPD were wrong, plain and simple. The actions and the laws were discriminatory and oppressive, and for that, I apologize.”

He continued by asserting: “I vow to the LGBTQ. community that this would never happen in the NYPD in 2019. We have, and we do, embrace all New Yorkers.”

While these statements serve as an appropriate first step, they certainly do not go nearly far enough.

These high rates are associated with disproportionate poverty, homelessness, societal and workplace discrimination, involvement in street economies, and, sometimes, bias from law enforcement. They are also at higher risk for harassment, abuse, and violence in juvenile detention facilities, jails, and prisons.

Where are the police department’s apologies and change to humane treatment?

Congress passed the Comstock Laws in 1873 that criminalized usage of the U.S. Postal Service to send any materials it considered “obscene, lewd, and/or lascivious” (which included most material with homosexual or non-gender-traditional themes), all contraceptives and birth control information, sex education, “abortifacients” (drugs used to abort a pregnancy), sex toys, anatomy books, personal letters with sexual content or information, and any letters with information from the other categories.

The laws were named to “honor” Anthony Comstock, Former U.S. Postal Inspector, Member of the National Purity Party (an eugenics organization), and Founder of the New York Society for the Suppression of Vice.

The New York police department was one that enforced these draconian laws. Where is the department’s apology?

One of the first New York City anti-gay police raids occurred on February 21, 1903 at the Ariston Bathhouse frequented by homosexual and bisexual men. Police detained 60 men and arrested 14.

The New York State Liquor Authority issued a policy in 1930 banning the serving of liquor to homosexuals in any licensed bar in New York State. Penalties included revocation of the bar’s operating license.

The courts confirmed the policy in the 1940s. The mere presence of homosexuals in a bar constituted “disorder.”

The New York police department was one that enforced this policy. Where is the department’s apology?

From the mid-19th century, several states passed laws prohibiting wearing, as stated in the 1845 New York law, “the dress of the opposite sex.” Anyone perceived as male could be arrested as late as 2011 in New York for “impersonating a female.”

Drag balls were a mainstay in many cities and smaller towns throughout the socially conservative 1930s. The New York City police department conducted frequent raids on these balls and arrested many of the participants, like the reported arrest at a “masque ball” in NYC in 1939.

The 1845 New York law defined an unlawful vagrant as a “person who, having his face painted, discolored, covered, or concealed, or being otherwise disguised, in a manner calculated to prevent his being identified, appears in a road or public highway.”

Police arrested a man in New York City as late as 1968 in a subway station where he was traveling home after attending a masquerade party.

Many of the earlier anti-crossdressing laws were not only intended to harass people assigned male at birth, but also were also a reaction by the government to inhibit and harass members of the burgeoning women’s movement for greater opportunities outside the home.

Feminist scholars have discovered the “association between dressing as men and the demands of young women for greater personal freedom.” Also, crossdressing women during the early 1900s was regarded in some areas of psychology as associated with insanity or homosexuality.

Police departments throughout the country were granted permission to intimidate, harass, arrest, and incarcerate what would become known as members of LGBTQ communities by top officials of the Federal Bureau of Investigation.

F.B.I. Director, J. Edgar Hoover, who was emotionally and likely to have been sexually involved with his “assistant,” Clyde Tolson, wrote in 1936:

The present apathy toward perverts [homosexuals] generally regarded as ‘harmless,’ should be changed to suspicious scrutiny. The harmless pervert of today can be and often is the loathsome mutilator and murderer of tomorrow….The ordinary offender [turned] into a dangerous, predatory animal, preying on society because he has been taught he can get away with it.

As the U.S. mobilized for war, many LGBTQ people left their small towns and rural communities and moved to major cities. There they met others like themselves. These cities saw a rapid growth of bars, which were often mafia owned and operated, to serve this increasing clientele.

Police often raided these spaces, sometimes arresting clients. Arrest blotters were printed in local newspapers, and arrestees often were fired from their jobs once they had been discovered.

Patrons tell stories of gruesome conditions inside these often crowded and musty spaces. In some of the women’s bars, they had to line up to enter the bathrooms. Once in line, they were handed the limit of three squares of toilet paper and no more to use.

Some cities mandated wearing at least three pieces of clothing “appropriate” to one’s birth sex under penalty of arrest.

Post-World War II events signaled the beginning of the “Cold War” and a swing further to political and social conservatism. On the floor of the U.S. Senate, the brash Senator Joseph McCarthy from Wisconsin sternly warned that communists corrupt the minds – and homosexuals corrupt the bodies – of good upstanding Americans, and he proceeded to have them officially banned from government service.

There are moments in history when conditions come together to create the impetus for great social change. Though organizing around “homophile” equality began during the 1950s and throughout the 60s in select cities in the United States, many historians and activists place the beginning of the modern movement for LGBTQ equality at the Stonewall Inn, a small bar frequented by trans people, lesbians, bisexuals, gay men, students, and others of all races located at 53 Christopher Street in New York City’s Greenwich Village.

At approximately 1:20 on the morning of June 28, 1969, New York City Police officers conducted a routine raid on the bar on the charge that the owners had been selling alcohol without a license. Feeling they had been harassed far too long, people challenged police officers on this morning lasting with varying intensity over the next five nights by flinging bottles, rocks, bricks, trash cans, and parking meters used as battering rams.

Even before these historic events at the Stonewall Inn, a lesser-known action preceded Stonewall by nearly three years and should more likely be considered as the founding event for the modern LGBT movement.

Out of the ashes of Compton’s Cafeteria and the Stonewall Inn, people, primarily young, formed several militant groups. One of the first was the Gay Liberation Front. GLF was not a formalized organization per se, but rather a series of small groups across the U.S. and other countries. Members insisted on the freedom to explore new ways of living as part of a radical project of social transformation.

People from this newly-emerging LGBTQ liberation movement organized the first Christopher Street Liberation Day March in June 1970 down New York City streets ending in Central Park. Today in large cities and small towns across the globe, annual Pride Marches and Parades commemorate the joy and the continuing struggle for our rights.

New York City police raids on LGBTQ spaces certainly did not end at the doors of the Stonewall Inn.

Just a few blocks from the Stonewall, police raided the Snake Pit, March 8, 1970 on charges that the bar was selling alcohol without a license. All the patrons were taken to the police station.

One of the patrons, Alfred Diego Vinales, a 23-year-old Argentinian national with an expired U.S. visa was so terrified that he threw himself from a window to escape police custody. He impaled himself in five places on his body on a spiked fence.

Police had to call welders to release him from the spikes. Alfred was then rushed to the hospital where he survived his serious injuries. The community organized a protest march condemning police harassment.

Racial profiling occurs when race is used by law enforcement or private security officials, to any degree, as a basis for criminal suspicion in non-suspect specific investigations. Racial profiling constitutes a form of discrimination, based on race, ethnicity, religion, nationality, and other identities, which, Amnesty International declares ‘undermines the basic human rights and freedoms to which every person is entitled.’

Throughout the U.S., police departments have racially profiled individuals, and the New York City policy of “stop-and-frisk” certainly falls under this definition since it was inordinately used on primarily people of color.

Gay African-American novelist, essayist, and civil rights activist, James Baldwin, was asked by a white reporter, “What do Negroes want?”

He responded by stating, “You ask the wrong question. It is no what we want from white people, but rather, can we forgive you?”

Apologies are nice to begin to end the rift between LGBTQ people and their local police departments and the larger society, but it takes more than apologies. Can (or should) we ever truly forgive?

Pride in Pictures: Dublin hosts a 10 day festival for Pride