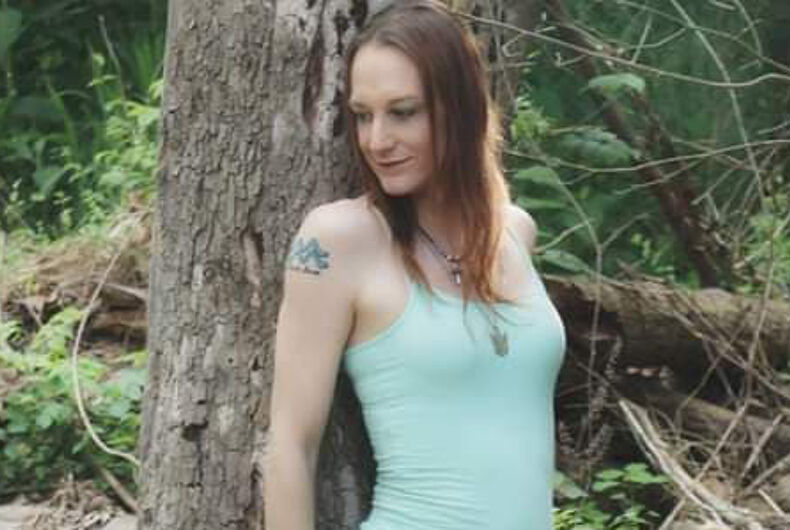 She was only on her way to visit a friend, but Lisa Stuart, a transgender woman living in Arkansas, dealt with a four and a half hour ordeal with the Benton County Sheriff’s Department.

Stuart had been pulled over after a patrol car spotted her driving through a neighborhood.

At the time, she was trying to locate a friend’s house. After they stopped her, they discovered she had a warrant for failing to appear for an expired tag on her vehicle.

Officers cuffed her and brought her to the Benton County Sheriff’s office for booking. It was during her initial pat down – with a female officer – that things began to go wrong. A female officer, who Stuart identifies as Deputy Bivins, went through Stuart’s purse while processing, and found one of her business cards.

Stuart is the Vice President of the Transgender Equality Network, a 501(c)(3) organization based in Northwest Arkansas.

“She didn’t say anything right then, at first” said Stuart to LGBTQ Nation. “Then she turned to me and said I have to ask you a question: did you use to be a man?”

“I think the question you are trying to ask is, ‘Am I transgender,’ and the answer to that is yes, I am transgender,” replied Stuart.

Deputy Bivins told Stuart she would not have known if she did not find the card and apologized for doing the pat down.

Deputy Bivins went to her supervisor and said, “So, she used to be a he, and I didn’t know this before I did the pat down.” She also asked the supervisor, who Stuart identified as Officer Ward, another female, where Stuart should be held.

The facility has two seating areas, separated by gender. The supervisor had another idea.

“Well, let’s just put her in a holding cell by herself for now,” said Ward, according to Stuart.

The holding cell faces out on the male seating area, and Stuart had to endure the half dozen or so male inmates seated there.

During her stay, she was removed several times from the cell to handle additional paperwork and to photograph her three tattoos: one on each shoulder and one on her thigh.

A female officer took her in to a photo room also within view of the male seating area and photographed her tattoos, revealing her bra strap to the other inmates and “causing hooting and hollering” from the men.

She was returned to the cell before the third tattoo was photographed, with a male officer showing up at the holding cell about 30 minutes later. They did not, however, go to the photo room.

“Outside the photo room, the officer said, ‘Let’s go to the bathroom to take care of this,'” said Stuart. “We step into the bathroom and he closes the door, and he tells me to undo my pants so he can take the photo of the thigh tattoo — which, of course, also reveals my underwear.”

On the way back to holding, the officer, who she identified as Deputy Kemp, paused with Stuart once again in front of the male inmates.

Kemp said to the other officers: “Are you ready for him yet, or should I put him back into the cell?”

This again set off the male inmates.

Deputy Bivins told Kemp that they were not ready for her and to take her back to the cell.

“I was having a bit of an anxiety attack after what happened,” said Stuart, as she was led back to the cell and curled up in a corner to avoid the gaze of the male inmates.

Kemp returned some time later to release Stuart, with her belongings. The officer motioned for her to put her shoes, belt, and other items back on. She was released shortly after, but not after officer Kemp continued to act passive-aggressively toward her.

The whole experience was hurtful to Stuart, who described it as, “embarrassing and degrading for me” and “unnecessary.”

“The other thing I find really confusing about it,” said Stuart. “A couple of years ago I was in a very similar situation in the same county, and went to the same jail, where I was patted down by a female officer. I was taken right into booking, and never had a problem…. Everything was fantastic. Well, as fantastic as any jail can be. Everything was super smooth.”

Added Stuart, “I can’t understand why they chose to do it different this time.”

Stuart is not sure what her next steps will be.

“I don’t know if there’s a lot of legal standing to make on this case, but what I definitely know is that’s not best practices for how to handle a transgender person in jail or prison,” she said.

Though her work with the Transgender Equality Network, she has trained officers and would like to see the officers see her in another capacity and learn, “what the best practices are – because that certainly wasn’t it.”

Rosie O’Donnell got engaged to a police officer