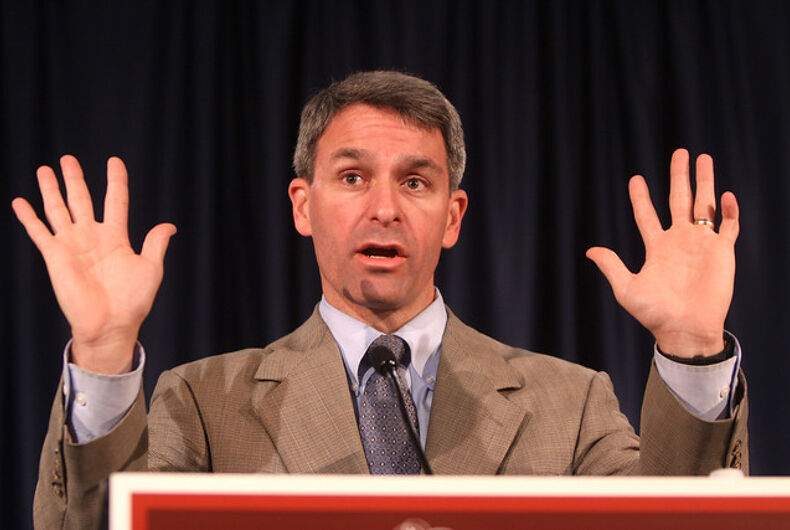 When we last heard from Ken Cuccinelli, he was heading to an ignominious defeat in the Virginia governor’s race. That was almost six years ago. But no extremist is unemployed for long when the Trump administration is seeking appointees. So now it looks like Cuccinelli has another opportunity to inflict his right-wing, anti-LGBTQ views on policy. According to news reports, he is headed for a new spot as the head of the nation’s immigration system.

To describe Cuccinelli’s positions as awful is an injustice to the word. He used his position as attorney general to push the most fevered dreams of the right-wing swamp, starting with his failed crusade to repeal Obamacare. But he particularly distinguished himself by his intense hatred of LGBTQ rights.

Cuccinelli fought to keep Virginia’s sodomy law on the books, even though the Supreme Court had struck such laws down 10 years earlier. To equate being gay with pedophilia, Cuccinelli launched a website called “VAChildPredators” that listed the names of anyone convicted of sodomy. Cuccinelli intentionally tried to muddy the waters by insisting that the law needed to remain on the books in order to protect children who had been molested. In fact, sodomy laws included any consensual oral or anal sex between adults as a “crime against nature.” To defend his actions, Cuccinelli took the case all the way to the U.S. Supreme Court and lost.

The sodomy law wasn’t Cuccinelli’s only attack on LGBTQ people. He insisted that same-sex couples do not have the right to adopt. He unsuccessfully sought to eliminate nondiscrimination protections at state colleges and universities.

Needless to say, Cuccinelli’s animus was a deeply held belief. Confronted during his gubernatorial campaign with past quotes calling gay people “soulless” and “self-destructive,” Cuccinelli doubled down on them.

“My personal beliefs about the personal challenges of homosexuality haven’t changed,” Cuccinelli said. And what were those beliefs? “When you look at the homosexual agenda, I cannot support something that I believe brings nothing but self-destruction, not only physically but of their soul,” Cuccinelli said in 2008. In 2009, he described gay sex as ‘intrinsically wrong.”

In short, Cuccinelli will fit perfectly in the Trump administration.

In case you were thinking that Cuccinelli will have limited opportunity to inflict his bias as immigration czar, think again. The Trump administration is trying to prevent children born overseas with same-sex American parents from getting U.S. citizenship. The administration is all but serving death warrants to LGBTQ asylum seekers, threatening to send them back to the violence that they were fleeing. The administration has also extended its policy of breaking up families of same-sex couples. In all of these cases, you can expect Cuccinelli to try to make things even worse.

Unlike other Trump appointees, Cuccinelli may have a rough time getting Senate confirmation. He has tangled with Senate Majority Leader Mitch McConnell in the past for promoting insurgent candidates instead of those preferred by the party establishment. When Cuccinelli’s name came up as the possible head of the Department of Homeland Security, McConnell said “I have expressed my, shall I say, lack of enthusiasm” for him. McConnell’s disdain could be the kiss of death for Cuccinelli.

Of course, Trump often doesn’t bother to seek confirmation for his appointees. Some Cabinet and Cabinet-level officials have been “acting” secretaries since January, and some agency heads have been “acting” dating back as long as two years. If that’s the case for Cuccinelli, he could do untold damage without being accountable to anyone but his boss.

These stunning photos shows the dual-identities of LGBTQ military veterans