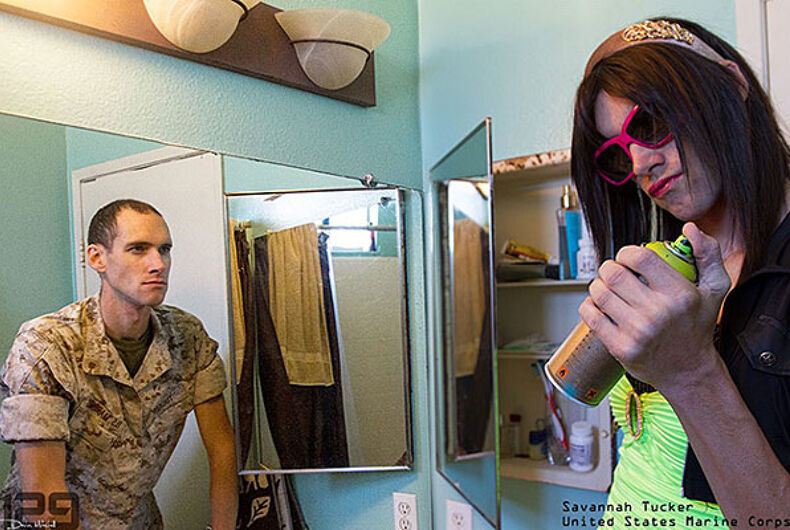 This Memorial Day, we wanted to take a look at photographer Devin Mitchell’s mirror portraits of LGBTQ military veterans which show the “double lives” they lead. Despite their uniforms, their reflections show their unique personalities, struggles and the difference between how others see them and how they see themselves.

Although it has been nearly a decade since the repeal of “Don’t Ask, Don’t Tell,” some lesbian, gay and bisexual military members stay closeted for personal safety reasons. Today, Trump’s ban on trans soldiers affects an estimated 1,320 to 15,000 trans military members. Off the battlefield, many veterans live in states where you can still be fired for being an out queer person.

Mitchell assembled these portraits into a book entitled “The Veteran Vision Project.” Though his book contained more than just queer military members, some of the portraits revealed other common (but little discussed) veteran struggles with post-traumatic stress disorder, addiction, military sexual trauma and other experiences.

When raising money for the book, Mitchell briefly explained, “I would take two portraits: one in uniform, and one in clothes that the veteran felt represented their civilian self. I then composited the two photographs into one photo illustration showing the intersection of their two identities.”

Related: Here’s what you need to know about the transgender military ban

Veterans would let him into their homes and they’d choose the props, outfits and poses that best represented their experiences. “The veteran population is so diverse,” Mitchell said, “and that is one of the elements that is so amazing about the project.”

He told Buzzfeed News, “There are two sides to this series. It spreads awareness about the veteran community, the challenges they face during reintegration into society. But it also works as a therapy for the subjects.… It makes visible what they feel.”

“It’s an intimate experience every time,” he added. “Sometimes people will make me dinner, sometimes I’ll spend time meeting their parents, sitting in their kitchens, talking with them about life.”

Here are some shots of LGBTQ veterans from Mitchell’s project. (You can see the complete set on the Veteran Vision Project Instagram):

"I'm currently a cadet at the Air Force Academy in Colorado Springs. Ever since I was young I wanted to be a fighter pilot. When I got accept to the academy I knew I was on my way to achieve my dreams. There is only one secret that troubled me, the fact that I like girls. A secret my mom found out about three days prior to this photo. It has not been an easy journey since then and I'm struggling to hold on to a relationship with her. I'm sad to see her upset but I'm glad I no longer have to hide who I am, wether she accepts it or not." -Domonique Gordon, United States Air Force. @Domo_leo @Domo_leo @Domo_leo Buy the book: www.veteranvisionproject.com/book Be Photographed: www.veteranvisionproject.com/register

"It's because of the unspoken sacrifices of veterans, like Lt Bruce Robison, that the wildest American dream can become true." -Jose Plata, United States Navy. @Chiple @jplata7