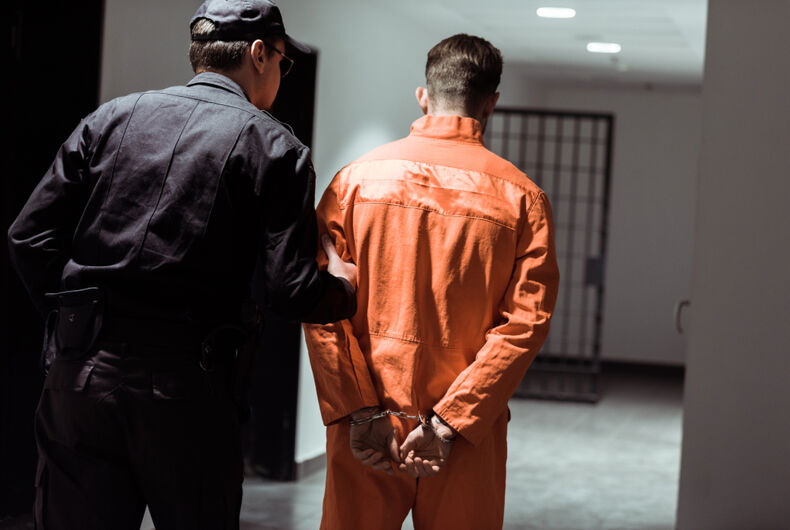 After pleading guilty in May of 2014 to transporting a stolen car across state lines, Alec Arapahoe, a gay Native American, was sentenced to nine months in prison. He was sent to a medium-security prison in Colorado, FCI Florence. While there, he came across William Mexican.

According to a complaint filed against 29 prison officials at FCI Florence reported in the Washington Post, Mexican found out that Arapahoe was gay and targeted the 21-year-old.

Mexican demanded money and threatened to rape Arapahoe. The threats continued, with Mexican telling Arapahoe in August that he should leave the prison yard or get beaten.

Arapahoe called his stepmother, Meg Bishop, and told her about the threats, and she told prison officials. He was moved into a segregated housing unit while his claims were investigated.

In the investigation, video surveillance showed a number of other inmates holding a discussion in the yard when Arapahoe was “voted off.”

Related: A North Carolina prison forces this woman to shower with dozens of men

When asked, most inmates denied any threats against Arapahoe. Mexican however, told officers that Arapahoe had called another Native American inmate a slur, and had “caused problems on the yard by disrespecting the wrong people.”

A report on the incident was sent to the warden of the prison, T.K. Cozza-Rhode. It was also around this time that Arapahoe approached a lieutenant of the segregated housing area, Robert Martin, seeking to talk to the warden about Mexican. However, no meeting with the warden took place.

In the middle of September, a note was left on Arapahoe’s cell window by an officer, claiming that Mexican was being transferred, and Arapahoe would be going back to FCI Florence. This, too, never ended up occurring.

Instead, on October 8th, Mexican was transferred into Arapahoe’s cell by three prison officers.

“Upon information and belief, Defendant Martin made the decision to place Mexican in Mr. Arapahoe’s cell, and did so either deliberately or indifferently without performing any investigation as to whether Mexican’s placement would create a safety risk for Mr. Arapahoe,” reads the complaint.

Mexican was in Arapahoe’s cell for two days, completely unsupervised. The young man was brutally beaten, raped, and forced to perform oral sex on Mexican. Arapahoe attempted several times to use a “duress button” in the cell to get help, but none arrived.

“As a result of Mexican’s morning and afternoon assault of Mr. Arapahoe, by the afternoon of Oct. 9, 2014, Mr. Arapahoe’s face was swollen, and he was unable to walk well because of the injuries to his upper thighs,” reads the complaint.

It was only on the second day, after Mexican went to the prison yard for recreation, that Arapahoe was able to finally alert guards. By this time, he was severely injured. He was then moved to a different cell, and, finally, sent to an outside emergency room for treatment.

Mexican pleaded guilty and received an additional 10-year charge for assault. He was also charged with aggravated sexual abuse, but was never convicted.

When the incident was investigated, the Federal Bureau of Prisons (BOP) found that 28 prison officials had committed offenses, including 19 guards who did not do required rounds. Six other guards falsified documents that said they did their rounds, when they hadn’t. Lieutenant Martin was also found to have violated policy.

While rules state that these officers should face at least an “official reprimand,” if not a 30-day suspension for first-time offenses of this nature, the Bureau of Prisons has remained mum on any disciplinary actions taken.

Arapahoe’s Lawyer, David Lane, feels the guards should face more than suspensions, and would prefer they be charged criminally.

“They all signed logs saying they did rounds,” said Lane to the Washington Post. “And some lied to people in the inspector general’s office that was doing the investigation. That is the crime — lying to a federal investigator.”

The Federal government has opted to settle the civil rights claim brought forth by Lane for $750,000, the maximum penalty allowed.