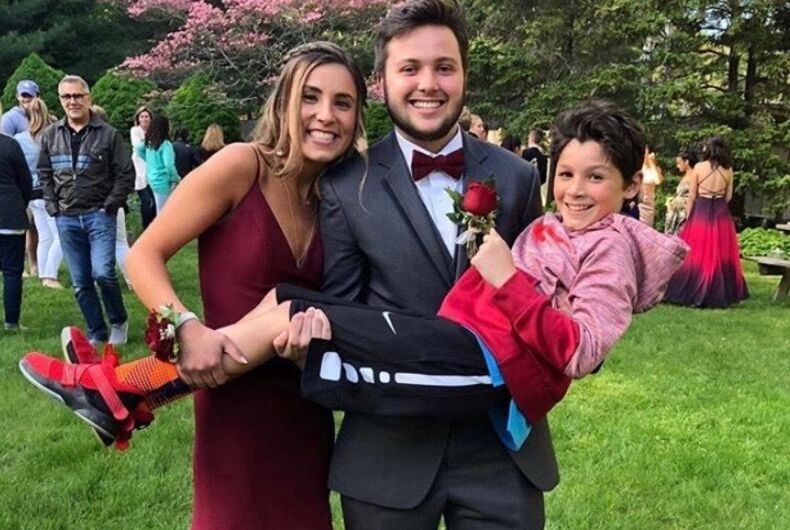 A high school in Massachusetts named a transgender student their prom king.

Nicholas Bulman used an Instagram post last summer to tell his classmates at Barnstable High School that he was in the process of transitioning. He said that he got lots of support and encouragement.

“I am now putting myself on the road toward being comfortable in my own skin,” he wrote in the post.

Related: This gay couple is fighting their high school to be Prom Kings

“A classmate came up and said, ‘You’re on the ballot,’” he said. “I didn’t know what that meant.”

Last Friday, he attended a Great Gatsby-themed prom with his classmates.

“It was a really fun night,” Bulman said. “Everyone looked dapper and beautiful.”

And he was announced as the prom king.

“It was… really awesome,” he said. “All my friends hugged me and congratulated me.”

He said that he struggled with his gender identity, and when he first heard the word “transgender” he was in the 8th grade. The word sounded like it fit.

“It helped me a lot knowing there were other people who understood what I was going through,” he said.

Last summer he started hormone replacement therapy, and earlier this year he got top surgery.

“When I was getting fitted [for a tux], everything fit better,” he said.

His story has been getting attention in local media, but he said that he isn’t bothered by the negative comments that have been appearing on the internet.

“Treat people with love and respect, because you never know what they’re going through,” he said.

Seth Rogen knows his movies made gay people ‘feel like s–t.’ He’s sorry about all that.