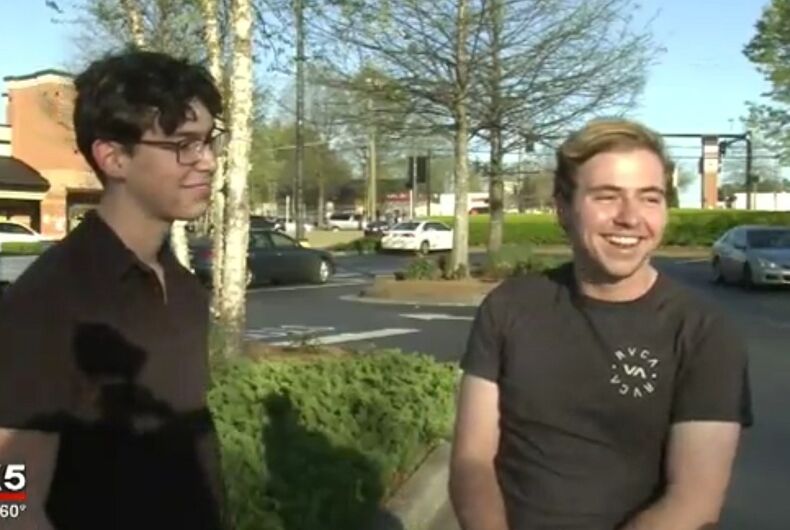 A gay couple at a Georgia high school say that they’re being discriminated against because they can’t win prom royalty titles together.

Since they are a couple, they thought they could win as a couple. But the school told them that one boy and one girl would win.

“I was really happy at first – wow, we have the opportunity to be this year’s high school king and king,” Lerner said. “It was heartbreaking.”

The boys say that the school has been accepting of them. “We’ve been lucky because we’ve never really been facing discrimination, especially in the area we’ve grown up in, and from the school, which has been amazing,” Hebert said.

They have launched a petition to get the titles changed to “Prom Royalty,” so that two people of any gender can win.

“In this case, it would allow for two people, regardless of gender or sexual orientation, to win,” the petition reads. “This not only allows the chance for a homosexual couple to possibly win, but it also ensures that the most deserving people win. This means that if the most deserving of the nominees are two girls, they would both be allowed to win, instead of historically only allowing one to be crowned royalty.”

The school district says that the ballots have already been printed and voting is underway, so the competition can’t be changed for this year. They also say that the competition is set up so that a boy and a girl win, but that they are not necessarily a heterosexual couple.

Students say that a heterosexual couple is up for nomination this year and a straight couple won last year.

“What we’ve had to go through, we don’t want anyone else to feel the same way,” Hebert said.

The petition currently has just under 500 signatures.