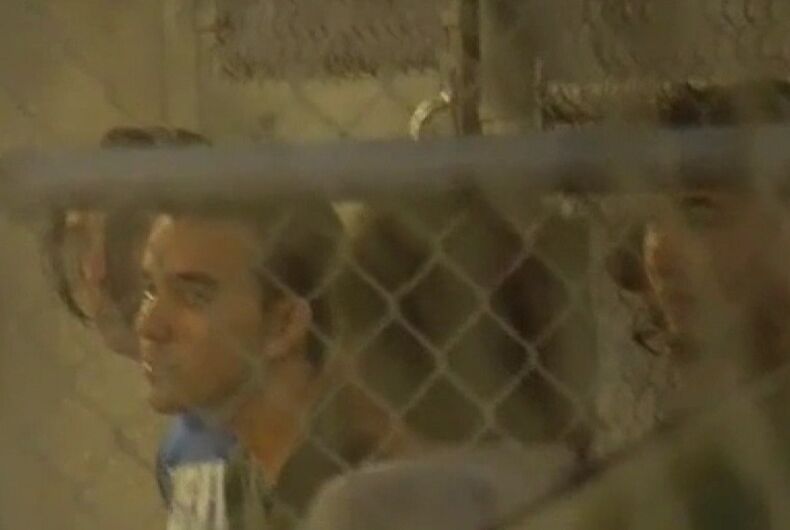 The suspects, laughing as they were processed by police.Photo: Screenshot/NBC 6 News

Four men caught on video attacking a gay couple and a bystander at Miami Beach Gay Pride have turned themselves into police.

The attack occurred at around 7:40 p.m. on Sunday, when Rene Chalarca and Dmitri Lugonov were holding each other outside a public restroom. Four men that they didn’t know came up to them and started punching them while shouting anti-gay slurs in Spanish.

“We probably provoked them because we were walking together, holding hands. It was gay pride, South Beach was full of gay people,” Logunov said.

Both of the victims suffered from bruises and cuts to their faces. Chalarca ended up with a broken tear duct and might need surgery.

“The way that we were dressed and everything, we were together. For me it’s, yes, a hate crime,” Chalarca said.

The attackers also beat Helmut Muller, a bystander who tried to help the couple as they were getting beaten. He was pushed back onto the pavement and had to get four stitches on the back of his head.

Yesterday afternoon, they announced that they had been arrested.

UPDATE: The 4 subjects have just surrendered @ MBPD through an attorney.

We anticipate felony charges for each of them. https://t.co/OUUKUPd3gl

The four turned themselves in to police through their attorney.

Police identified them as Juan C. Lopez, Adonis Diaz, Pablo Romo-Figueroa, and Luis Alonso-Piovet, all 20- or 21-years-old. They are each being held on 3 charges of felony aggravated battery, and the state is looking into hate crimes charges. All four were released on bail.

State attorney Kathy Rundle tweeted that the Hate Crime Unit will be looking into the case.

I can assure you & our community that my Hate Crimes Unit will evaluate this incident thoroughly. They have been working with @MiamiBeachPD since it occurred. Hate crimes can be enhanced under Florida law. #EqualityForAll https://t.co/k4h6C7zRCm

“At least now they are with the police,” said Chalarca, who is still in constant pain. “Something like this is not going to happen, they’re not going to be able to do it to another person.”

According to police records, bond was set at $7500 each.

We may end up missing Paul Ryan. No, really.