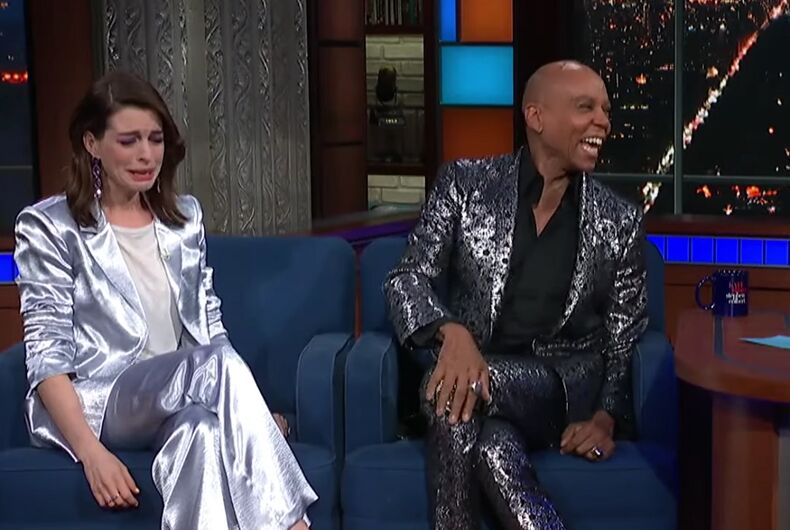 Anne Hathaway was in tears when she got to meet her idol: RuPaul.

Hathaway was on Stephen Colbert’s Late Show to promote her new movie, The Hustle, when Colbert asked her what she likes to watch on TV.

She mentioned RuPaul’s Drag Race. Colbert asked Hathaway if she had anything she wanted to say to RuPaul, and she meekly replied, “I love you.”

That’s when Cobert said that Mama Ru was already there and she came prancing out on stage.

“Darling, you are the winner of this week’s challenge. Shantay, you stay,” RuPaul said to Hathaway.

Hathaway was in tears, and Colbert asked her if she had a favorite moment from RuPaul’s Drag Race.

“Monet X Change’s entire journey, and just how amazing she was in season 10,” she said.

“And then the growth between season 10 and [All Stars 4] and how she stepped her pussy up.”

‘I felt that because since I’ve been an actress I felt like I’ve learned how to step my pussy up. And now I’m [expletive] up and I’m just thrilled for her and me and you and you.”

These amazing parents surprised their transgender son… with matching tattoos

Jerry Falwell Jr. denies ‘racy’ photos are of himself. Doesn’t mention his wife or the pool boy.