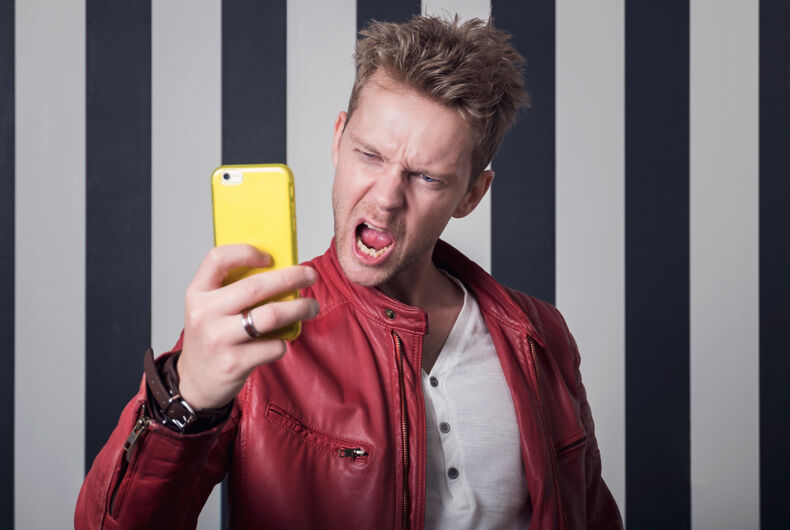 If you walked into your local mall today, and sandwiched in between Banana Republic and Victoria’s Secret was a shop peddling Nazi paraphernalia, you’d probably be livid. Community protests would quickly erupt and breathless news crews would rapidly be deployed.

Yet, we passively accept that our major tech companies have given space – in between legitimate profiles and videos — for Nazis to network and white supremacists to hawk offensive T-shirts and hate music. The world doesn’t have to be this way and we should no longer accept this growing threat to our personal and national security.

The Big Tech companies would have you believe that it’s an impossible task to shut down the online hate machine. This is not only demonstrably untrue, but these companies aren’t even trying. What they are truly afraid of is losing market share by reducing the total number of users – because hateful bigots are not an insubstantial number of their customers.

Well, it’s too bad if these mammoth companies aren’t quite as rich in the effort to make the world a saner and safer place. They need to take action now before the problem gets worse.

If these shameful companies were serious, they would begin by reviewing the Southern Poverty Law Center’s (SPLC) online hate map, and then conduct searches on their platforms of the 981 catalogued statewide hate groups. If they did, within microseconds they would be transported into a toilet of intolerance that helps explain the increase in self-radicalizing extremists who sometimes become terrorists.

If I can track the pages of hate groups with little effort, why can’t these multibillion-dollar conglomerates do the same unless they really don’t care?

These corporations might argue that eliminating Facebook profiles or YouTube videos of extremists won’t stop the hardcore haters from migrating to less monitored sites like Gab or 8-Chan. This is true, but taking action would certainly inhibit the casual internet user from easily stumbling upon this vortex of vituperation, thus limiting the number of people exposed to dangerous propaganda.

The major tech companies should have tightly enforced policies of zero tolerance for hate groups and expend considerable resources to scrub their platforms.

Defining a hate group is much easier than people might believe. If a group promotes an ideology that says their members are inherently superior to those who are in other groups, they should be removed.

The tech companies must no longer inflate their user numbers by marketing to right wing extremists as if they are just another community in which to market to and profit from.

There are certainly legitimate concerns about “free speech” and the “marketplace of ideas.” It’s important that efforts to combat hate groups are not abused or foolishly enforced to ban innocent organizations. There also needs to be mechanisms to quickly appeal decisions where the tech companies are responsive and correct errors.

That said, we must first remember that the tech giants are companies, not the government, so they are free to curtail toxic viewpoints.

Second, we aren’t free to say anything we want — the proverbial example of not being able to scream “fire” in a crowded theater comes to mind. If you think about it, online platforms are basically a giant worldwide theater, yet we allow them to be packed with flame-throwing trolls screaming “fire” and inciting hate and violence.

Third, you can limit bad ideas for the good of society without necessarily creating a slippery slope that endangers free speech.  For instance, we ban child pornography, yet it rarely imperils legitimate adult entertainment. The same concept would apply to prohibiting hate groups.

Finally, a marketplace of ideas implies a competition or debate between two morally equivalent sides where there are winners and losers. Hasn’t recent history taught us that under certain conditions, nefarious and deadly ideas do sometimes prevail in markets susceptible to a perverted ideology? Haven’t psychotic ideologies led to enough unimaginable horrors that we can agree to no longer debate a group’s right to exist in civilized 21st Century forums?

The notion that violent extremism might triumph is not hypothetical.  The Holocaust was only eight short decades ago. In 1994, Hutu broadcasters referred to Rwanda’s Tutsi’s as “cockroaches” and 800,000 were exterminated.  In July 1995, Bosnian Serb forces killed as many as 8,000 Muslims in Srebrenica, the largest mass slaughter in Europe since the Holocaust.

More recently, we have seen an eliminationist campaign in Myanmar waged against its Rohingya minority, aided by Facebook, the same irresponsible company that damaged America’s democracy in the 2016 election. We had an anti-Muslim extremist live stream on Facebook his shooting spree at a New Zealand mosque. This inspired a white supremacist gunman to storm a San Diego synagogue and open fire on worshippers.

In Sri Lanka, Islamic extremists terrorized churchgoers, leading officials to “temporarily block major social media and messaging services, including Facebook and WhatsApp, to curb misinformation.” The New York Times wrote. “Though Sunday’s attacks have no known link to social media, Sri Lanka has a troubled history with violence incited on the platforms. Its ban was an extraordinary step that reflects growing global concerns about social media.”

Google promoted harm against LGBT people for months before finally succumbing to pressure to take down an “ex-gay” app from its online store. Although much less dramatic than the previous examples, it does show the irresponsibility of leading social media companies that are seemingly unconcerned about the negative consequences of hate finding a home on their sites.

It’s time to acknowledge that toxic ideologies and the groups that promote them are a threat to peace, safety and civilization. They help create radicalized, violent people full of vengeance and opportunistic politicians, like Donald Trump and Jair Bolsonaro, who cynically exploit the manufactured rage for political gain.

The only way to stop this out of control wildfire of fanaticism is to douse the flames with water. The Wild West age of the internet must end before we can no longer put the rabid horse back in the barn.

We don’t need many rules in this new era, other than forbidding divisive hate groups. These are clearly defined by those who believe they are inherently superior and their existence depends on oppressing other groups of people. Not only will free speech survive and prosper without promoting such vile ideologies — but so will free countries, not undermined by the virus of ethnic, racial or religious nationalism.