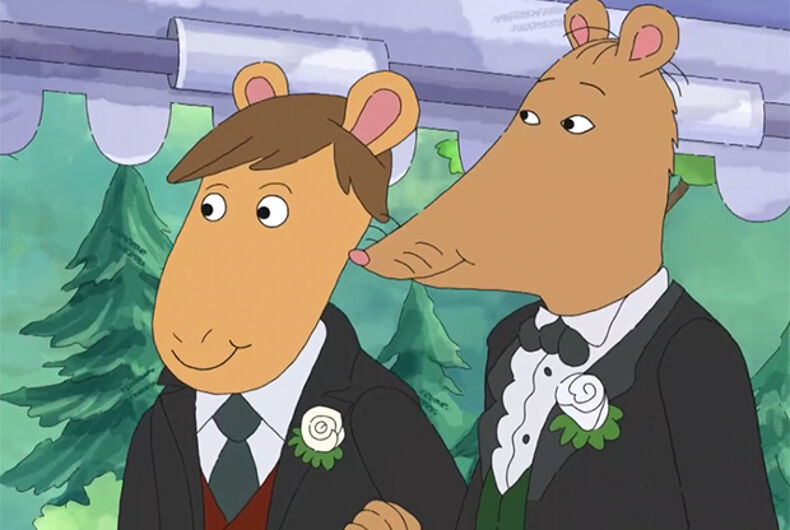 The right has lost it because a cartoon rat came out of the closet.

Earlier this week, Mr. Ratburn, the teacher on the long-running cartoon Arthur, got married to a man, effectively coming out to America.

One Million Moms beat most of the right by getting a petition up immediately. The petition says viewers are “outraged” by the “offensive” cartoon that “would glorify the homosexual lifestyle.”

“That’s been the left from Robespierre to Trotsky to Marcuse to Alinsky to Clinton to Obama to today,” Gorka said on his radio show. “Civil society doesn’t exist, friendship doesn’t exist, family doesn’t exist — only permanent revolution.”

He had no evidence that the show’s writers thought that they were part of the “permanent revolution,” and in fact the only person who said that this had anything to do with a war-without-end was Gorka himself.

“Did you have any questions about there being a culture war, ladies and gentlemen?” Gorka continued. “Did you have any doubt in your mind? This is a war for our culture, and that’s why we exist here, on America First, on the Salem Radio Network.”

For anyone living in a cave who missed that there’s a culture war. pic.twitter.com/OH4SMgGmBv

Franklin Graham, son of Billy Graham, has been in the news lately for calling on Pete Buttigieg to “repent” for his homosexuality and saying that nothing other than prayer can stop a mass shooting (and prayer for sensible gun control doesn’t count).

And now he appears to be calling for a revolution.

“Do your children or grandchildren watch the cartoon ‘Arthur’? I hope not,” Graham wrote on Facebook.

“This PBS animated series is promoting the LGBTQ agenda. In a new episode, Arthur’s male third grade teacher gets married – to another male character. During the wedding, one of the students exclaims, ‘It’s a brand new world!’ I’ll say – but not for the better.”

He called on people to “rise up” against a children’s cartoon.

“I hope everyone will rise up and clearly tell PBS that they do not want to see this kind of programming slipped in to try to influence the hearts and minds of our children and grandchildren,” he wrote.

Tony Perkins, the head of the anti-LGBTQ hate group Family Research Council couldn’t help jumping on the bandwagon too, but his solution is to get rid of public television and radio because they have a “radical agenda” and “can’t be trusted.”

PBS has “spent the last umpteen years using its half-billion taxpayer dollars promoting the agenda of the far Left. Now, apparently, that agenda includes pitching same-sex marriage to kids as young as four – and using one of their favorite characters to do it,” Perkins whines in a press release.

“For PBS, though, this is all par for its liberal course. Taxpayers have fought for years to stop the government’s broadcasting arm from sexualizing kids on everything from the Muppets to Sesame Street. When Donald Trump became president, one of the first things his budget proposed was slashing the $445 million for the Corporation of Public Broadcasting.”

“The Left always pleads with Republicans to lay off Burt and Ernie, but what they really mean is — don’t stop funding the Left’s free microphone!” he said.

It’s not just conservatives with large platforms who are speaking out against Mr. Ratburn’s family. A gay PBS employee told Pride that the network has been getting calls about the episode.

“My job is to take feedback about our programs,” the employee said. “I dutifully took her feedback about a gay relationship being portrayed on Arthur.”

“I’m a professional. I will put up with it when it’s relevant to my position, but I don’t get paid to put up with harassment.”

Still, the episode was produced and aired, unlike the 2005 episode of Postcards from Buster, which got pulled when the Secretary of Education threatened the show’s funding.

So far, Betsy DeVos, the current Secretary of Education, hasn’t stated an opinion on the episode.