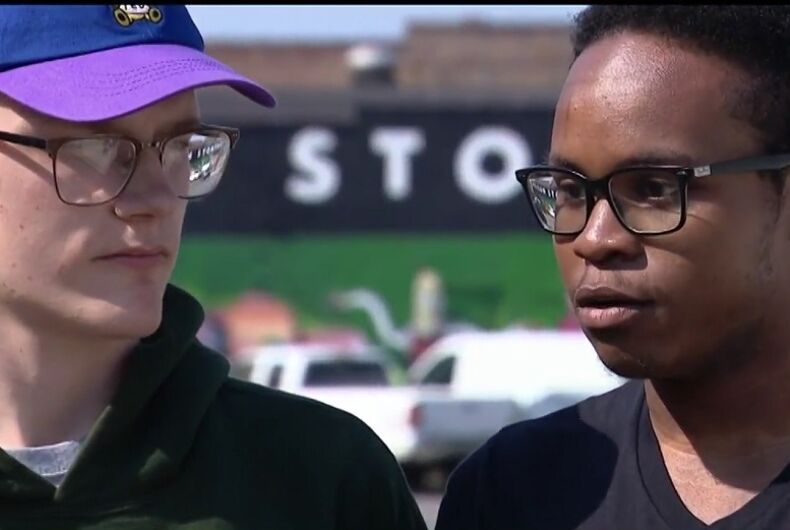 A Chicago restaurant has come under fire for allegedly kicking out two boys for hugging.

A group of students from Lane Tech High School went to the nearby Big Boy Gyros this past Monday for lunch. As the teens were getting settled in, Kendall Anderson and Peder Sevig, who are boyfriends, hugged.

Anderson said that that’s when a Big Boy employee told them, “We can’t have two guys hugging in here.”

“And then he said something to the effect of if it was a guy and a girl it would be okay, but we can’t allow two boys,” he told CBS Chicago.

The students decided to leave, but the employee continued.

“Right before we left he said, ‘Get out. We don’t want your kind here, anyway,’ and that was that,” said Anderson.

Lyla Stern, who witnessed the incident, said that she didn’t say anything at the time.

“I have never really experienced anything like that before and I, I didn’t really know how to react,” she told Fox 32.

Now students are calling for a boycott of the restaurant.

The school even sent a message to parents that they do not support the restaurant.

“Earlier today we were informed of an incident involving some of our students at Big Boy Gyros,” the message said.

“An innocent display of affection was shared by two young students which prompted a restaurant staff member to shout homophobic phrases at our students. When our students proceeded to leave, he made it a point to share that ‘they’ (LGBT+) were not welcomed.”

“As a school, we are disheartened because our students were treated with disrespect and made to feel unwelcome. As a community, we stand strong and we want to make it clear that Lane Tech does not stand for discrimination of any kind.”

“I’m actually pretty proud about my school’s handling of it,” said Smith.

The religious right has flipped its lid over a cartoon rat