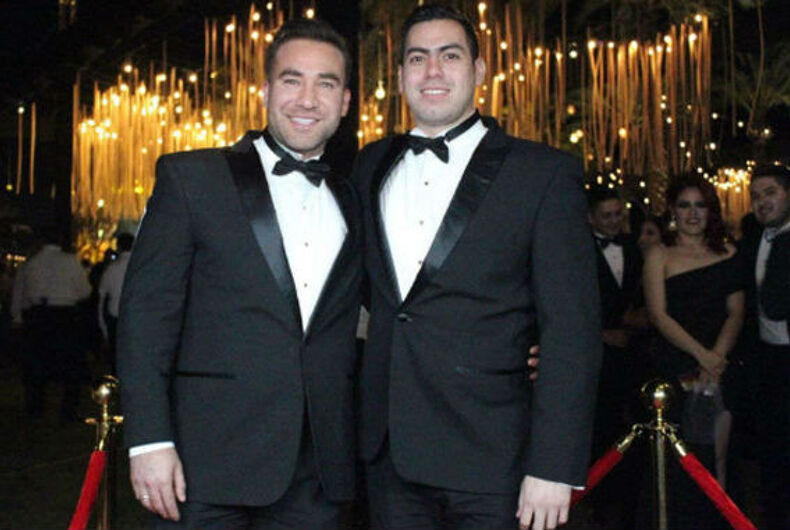 On Sunday, April 28, Rubén Veliz and Edwin Contreras — a same-sex couple in the Mexican city of Monterrey, Nuevo León — went to the restaurant Pozole Y Tacos and were refused service by its owner, Pedro Veliz (no relation), after he saw the two men holding hands.

Rubén and Contreras began recording the incident when police got involved and their video has since gone viral after being shared by the local LGBTQ rights group, Colectivo Somos Mundo. The group has since planned a Saturday, May 4 protest outside of the restaurant. The men are reportedly reporting the incident to government agencies, but haven’t pressed civil charges.

The restaurant’s owner reportedly told the couple, “I understand what you are doing and I am not homophobic, but here with what you are doing, I can not give you service.” The couple then left and returned with police.

In the video (below), a police officer accompanies the same-sex couple to confront the restaurant workers. The officer asks the owner’s name and he gives it, but he refuses to let the men in or to continue speaking in front of their camera. Pedro tells police, “What the f*ck, I’m the owner. You’re questioning me as if I was the president or something.”

The men respond, “You know it’s against the law. What did we do? Why did you kick us out…?” before Pedro closes the restaurant door. Mexico has a federal law forbidding refusal of public accommodations based on sexual orientation.

Later, an unnamed employee comes out of the restaurant and tells police that the same-sex couple were refused service because the restaurant has a “family atmosphere.” He says, “This is a family establishment, not a bar.”

The men explain that they were just holding hands and there was nothing inappropriate about it. The employee says that while the couple has the right to express their sexuality, his “clients” see it another way.

The owner reportedly said, “In this place we do not accept this kind of behavior and I have all the right to run them out.” He later told the couple “I just want you to leave. You’ll never come back in here. I promise you.”