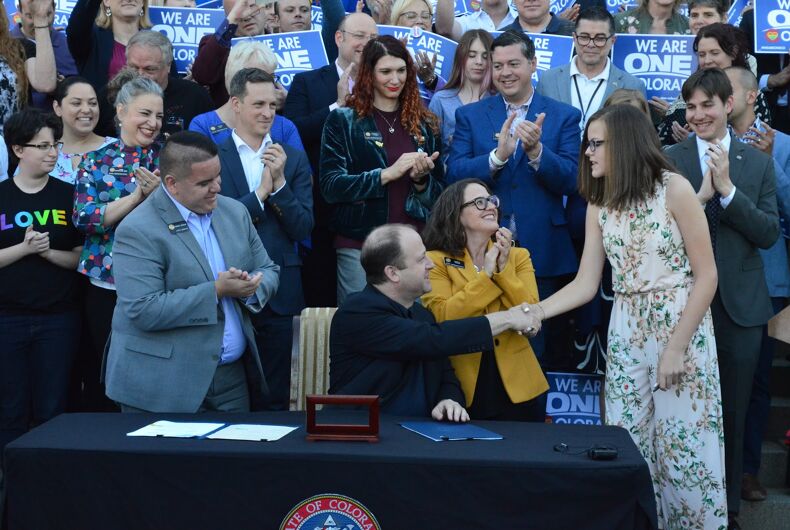 Governor Jared Polis hands the pen he used to sign Jude's Law to the legislation's namesake.Photo: One Colorado

Polis signed a bill that would outlaw giving youth “conversion therapy,” a harmful practice promoted by the religious right that claims to turn gay people straight. The bill passed with bipartisan support in the legislature.

“Being gay is not a mental illness and it does not need to be fixed. After sponsoring this bill for the past three years, I’m proud this will be the year we put an end to this harmful and deceptive practice,” Senate Majority Leader Steve Fenberg said.

The law is named after a transgender student who has repeatedly testified in front of the legislature on the need for the change in existing law.

“Jude has testified at the capitol in support of this legislation for years now. We have watched her grow up in front of our eyes. She has been simply asking this legislature to give her the ability to live her most genuine life,” Representative Daneya Esgar said after the signing.

“This was a historic session for LGBTQ Coloradans and their families,” One Colorado Executive Director Daniel Ramos said in an emailed statement. “The strong bipartisan support of both of these bills further demonstrates that LGBTQ equality should be a nonpartisan issue, and we applaud the Republicans who stood with our community.”

You see more men in HIV studies & trials. But what about women?