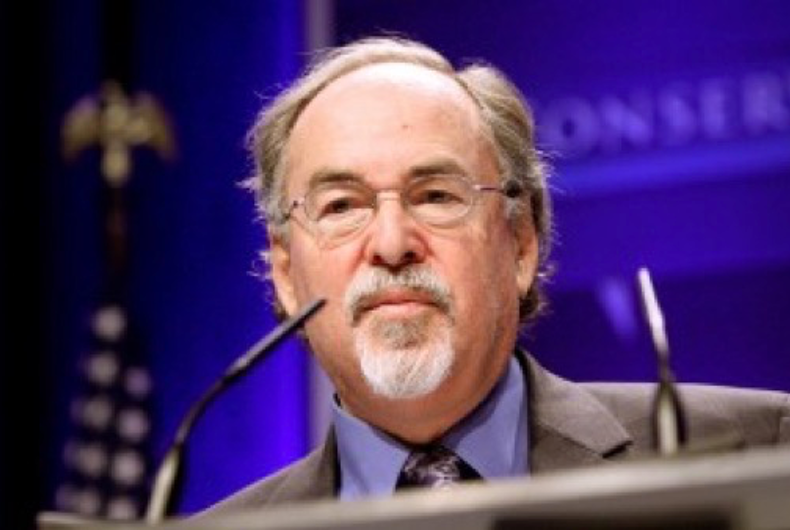 Shortly after Democrats swept statewide elections including the state’s first out gay Governor, Colorado Republicans held a retreat to discuss where they went wrong.

As the state continues to diversify, Republicans decided they could best learn what the population truly wants by inviting David Horowitz, the leader of a vehemently anti-immigration and anti-Muslim hate group, to keynote the gathering.

The Southern Poverty Law Center describes the David Horowitz Freedom Center as “a platform to project hate and misinformation.” But Colorado Republicans welcomed him with open arms – and he gave them what they wanted.

The Colorado Times Reporter published the beginning of Horowitz’s speech to the gathering and he pulls no punches as he urges them to shrug off criticism of neo-Nazi and white supremacist ideology. Instead, he says, Republicans should vilify Democrats by accusing them of racism and supporting terrorists.

Here’s my lesson from the recent election in my newly adopted state: You’re too damn nice. Democrats call Republicans “racists, sexists, homophobes, Islamophobes, xenophobes” and “Nazis.” And Republicans call Democrats … “liberals.” Stop it! What are Democrats liberal about except sex, drugs, spending other people’s money, coddling criminals, giving America’s mortal enemies like Iran the benefit of the doubt, nuclear weapons and billions in cash to finance their terrorist activities, and opening borders to terrorists, sexual predators and whoever comes along? Democrats don’t even believe in due process any more. Innocent until proven guilty? That’s for aging white men – Republicans. The Democrats are satisfied with guilt by accusation. The Democratic Party is a party of racists, character assassins and, oh, liars. Say it.

Horowitz is so inflammatory, several companies dropped their memberships in the conservative American Legislative Exchange Council (ALEC) after he spoke at a group gathering. ALEC lobbies state governments and regularly provides pre-written bills for legislators to file that support conservative ideology.

Related: A major business group is extending its agenda to include the religious right’s wishlist

AT&T, Verizon, and Dow Chemical all left the group after Horowitz was invited to speak.

“Our company has no tolerance for racist, white supremacist or sexist comment or ideals,” a Verizon spokesperson said when the company announced they would leave the group.

ALEC eventually removed video of the speech from its website and disavowed Horowitz. So what could spurred Republicans to invite him to speak?

State senator Kevin Lundberg invited Horowitz to speak and he said he watched Horowitz’s speech to ALEC and decided it wasn’t that bad after all.

“I believe he had some very salient points to make. He doesn’t mince words. He dives right in and tells you what he thinks in a very forthright manner. He does have some observations that are worth paying attention to,” he told the Colorado Times Recorder.

“I came to the conclusion that Mr. Horowitz was not being fairly represented, and I felt he has valuable things to say to the Colorado Republican caucus and so I asked him to speak to us and he did.”

Democrat Jared Polis won the governor’s seat by double digits over his opponent, Walker Stapleton, despite Republican claims that he was “too radical” for the state.

“The Stapleton and Republican wish that they have the opportunity to run against Jared Polis — because they regarded him as the weakest of the Democratic candidates — was a misplaced wish,” Eric Sondermann, an independent political analyst, told the Denver Post after the election.

“The Republicans badly, badly need some reflection, some reassessment, some recalibration, because what they’re doing hasn’t worked in Colorado for a decade and a half. The arrow is pointed south instead of north.”