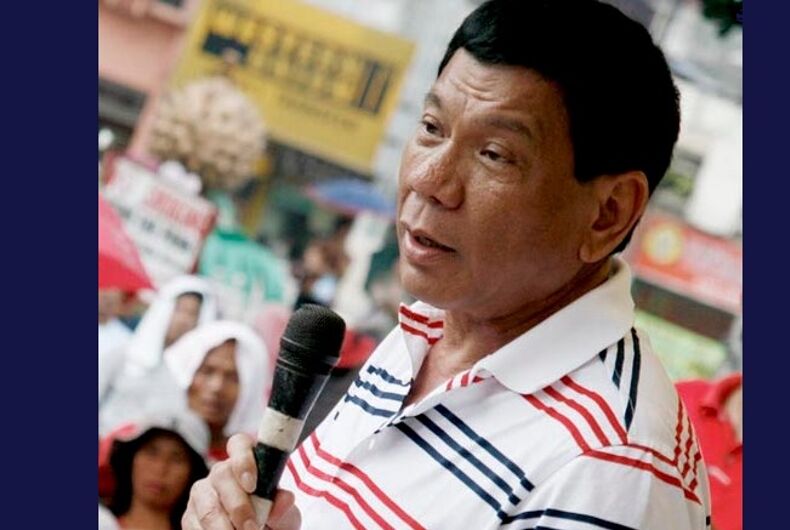 Rodrigo Duterte, the conservative president of the Philippines, said that he used to be gay but that he has since been “cured.”

During a speech yesterday, Duterte “confessed” that he was gay before he met his ex-wife, Elizabeth Zimmerman, local publication Rappler reports.

He then attacked Senator Antonio Trillanes IV, one of his main critics, accusing the senator of being gay. Duterte said that Trillanes’s “movements” showed that he was gay.

“You ask any gay person who sees Trillanes move, they’ll say he’s gay,” Duterte said. “Good thing Trillanes and I are similar. But I cured myself.”

“When I began a relationship with Zimmerman, I said, this is it. I became a man again.”

This isn’t the first time Duterte has claimed to be ex-gay. In April, responding to criticism of how he frequently uses anti-gay epithets as insults for political rivals, Duterte said that gay people can’t get mad at him because he used to be gay.

“To the gays: don’t get angry with me,” he said, after calling Solicitor General Florin Hilbay, Senator Trillanes, and human rights lawyer Chel Diokno gay. “I was once gay. It’s true.”

In March, he joked that taking selfies with men would turn him gay.

Duterte hasn’t limited his insults to his domestic rivals, either. In 2016, he called Philip Goldberg, the U.S. Ambassador to the Philippines, “gay” and a “son of a whore.”

It is unclear whether his statements are just bizarre, childish insults or a sign of an obsession with homosexuality related to his own suppressed sexual orientation.

Duterte was married for two years to Elizabeth Zimmerman before they had the marriage annulled. They both claim the marriage ended because Duterte was having extramarital sex.

He is currently living with his common law wife, Honeylet Avanceña.

Conservative Christians are outraged by an ‘offensive’ shampoo ad this time